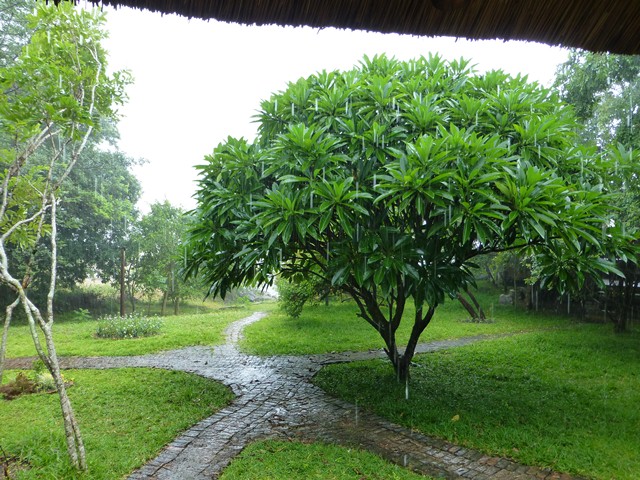 “Having not visited Mwaya at this time of year before I have been struck by the immediate effects of the rainy season. The first surprise is the flight approach into Lillongwe Airport where the usual brown and dry landscape has been transformed into a rich green carpet. Mwaya and the surrounding area looks so lush and green and the growth rates of the plants and trees are incredible – everywhere looks so different compared to later in the year.

The skies at Mwaya are always fabulous but at this time of year with the dramatic effects of gathering storm clouds, amazing cloud formation and the added ingredients of lighting, rich sunsets all combine to create an ever changing visual drama which is glorious to watch. Sitting on the deck with G&T watching the sky and lake is a truly special and unique experience.

The weather is currently very hot and humid so there is a regular need for swimming in the lake to keep cool. The level of the lake has risen significantly and is surrounding most of the upper rocks. The fresh storm winds are very welcome and provide a cooling breeze though the chalets. It has been noticed that Charlie has dropped standards due to the heat and has not been wearing slippers at dinner!

The Night watchmen who are an important but sometimes forgotten part of the RIPPLE team kept us entertained after dark with their comment and banter. I was disappointed to note that Sisimwenye (watchman) has become much more conservative in his dress style however his choice in umbrellias would be well received at Ascot! Nundas (head watchman) continues to expand his notable selection of hats & caps.

Due to technical plumbing problems with the hot water system at Mwaya we are enjoying cold showers thus returning to the pioneering days at Mwaya. However, the frequency of visits to Lowani has increased!

I have been able to spend time this week with Charlie and Fumbani travelling out into the countryside around Mpamba, north of Nkhata Bay, to see the progress of the Changa Changa Moto Project. There are a considerable number of stoves constructed and in use. Meeting the villagers there is definite enthusiasm for the stoves and the advantages they bring .There are still some issues with on-going maintenance and user familiarity but I was greatly impressed with the progress to date and the extent of use. This is a great project and promises to bring many environmental and conservation benefits to the area.

It has been very encouraging to see the speed of progress of the new teachers houses at Kapanda with the first house now roofed. The medical assistant’s house next to Mwaya dispensary is also well advanced in construction with the roof shortly to be fitted. The most impressive of the current building programme is the new RIPPLE office at Chintheche. This is now rapidly approaching completion with mainly just the external areas to be finished. This office will provide RIPPLE with a great long term base for its environmental activities.

This weekend sees the departure of Peter and Abby who after a very successful period of volunteering are heading back to Australia via Zambia and Cape Town. It’s always a sad occasion when volunteers leave Mwaya but hopefully they will return and enjoy once again the familiar, friendly faces of the RIPPLE staff and again the magic of Mwaya and RIPPLE Africa.”