RIPPLE Africa is pleased to announce a brand new feature on our website: Mwaya Mondays! Mwaya Mondays is the new weekly blog from RIPPLE Africa, which will feature fun updates about everything that’s happening directly on the ground in Mwaya, Malawi. RIPPLE Africa has always tried to hit the right balance between providing important news highlights, without overwhelming anyone with too much information. However lots of people have told us they can’t get enough of RIPPLE Africa, and for previous volunteers in particular, it’s the day to day news from Malawi that they want to hear about most. Mwaya Mondays now fills this gap: we’ll still continue to provide important news updates from time to time, however we’ll also update our blog every Monday for a full summary of each week of life at Mwaya Beach in Malawi. Mwaya Mondays is designed to be fun, informal, and regular- reading it should feel like a visit to Malawi!

The first instalment of Mwaya Mondays is written from Malawi by RIPPLE Africa employee Charlie Knight:

“It’s a nice time to be at Mwaya at the minute, and a small group of volunteers are currently working on the ground in healthcare, and education. Helen, Georgia, Kelly, and Eve have all been working hard, and it’s great to see previous volunteer Jenni is back for a second stint of volunteering. Added to the mix is of course Geoff who has been in Malawi since April, and Kay and Cassie from partner charity Taking Back Lives. That makes for a nice size round the dinner table at Mwaya Beach!

For project news this week, we’ve seen progress on RIPPLE’s new fish conservation undertaking. This new project is aimed at trying to counter the depleting fish stocks in the lake due to over fishing. Anyone who has stayed at Mwaya will know well how much fishing occurs (both in and out of season!) and that the habit of catching small fish using mosquito nets before they have the chance to develop has contributed greatly to Lake Malawi’s dwindling population of fish. The idea is to trial a project locally from Makuzi to Tukombo to see if we can do something about this. We’re beginning to get a clearer picture of what needs to be done, and the documentation is coming along well. Saturday saw a very successful meeting with myself, Geoff, Justin (from Aquanuts, the scuba centre at neighbouring Kande Beach), Alex (the local government fisheries worker), and Solomon (RIPPLE Africa’s new full-time fisheries coordinator.)

Some of the team also had an interesting field trip to the north of Nkhata Bay this week, when we visited Kandoli, Kabunduli, and some tea estates. We first went to look at the Kandoli conservation area, a project started in 2011, which is continuing to progress well. We also went to do some reconnaissance for more Changu Changu Moto building in an area called Kabunduli, south of Mzuzu. It was lovely going up into the hills, especially driving through the beautiful Kawalazi tea plantation that looked like a huge bright great green sea. 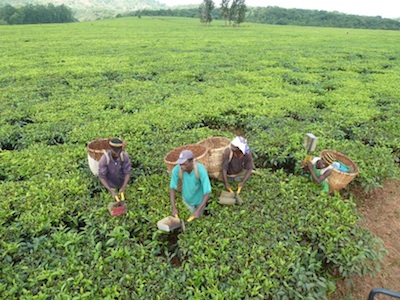 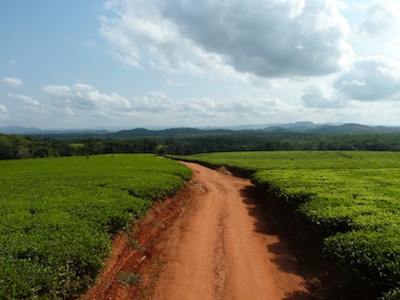 Considering I volunteered with RIPPLE Africa for one year from April 2011 and have been working for RIPPLE full-time in Malawi from April 2012, it was finally time to visit my first full pre-school session, and about time! I went with Helen, Georgia, and Kelly and had great fun, and it was especially nice to see Watson and Akim who run Katenthere pre-school.

Those of us living at Mwaya have been quite spoiled at present with lots of good food and fun activities. We all went for a lovely dinner at Makuzu Beach on Thursday evening, a beautiful lodge north of Mwaya. We even had a swim out to “bird rock,” before having dinner down on the beach. We’ve also had our first game of beach cricket for ages- excellent fun, and we even tried to teach a few of the locals the finer technicalities of this great game! A splendid dinner was rounded off on Friday night with cheese and port- delicious!

This week we’ll be saying goodbye to Kay and Cassie from Taking Back Lives, along with volunteer Eve who has been out at Mwaya for the last month. I look forward to reporting back next week on life at Mwaya!”

Make sure not to miss the next instalment of Mwaya Mondays, next Monday!