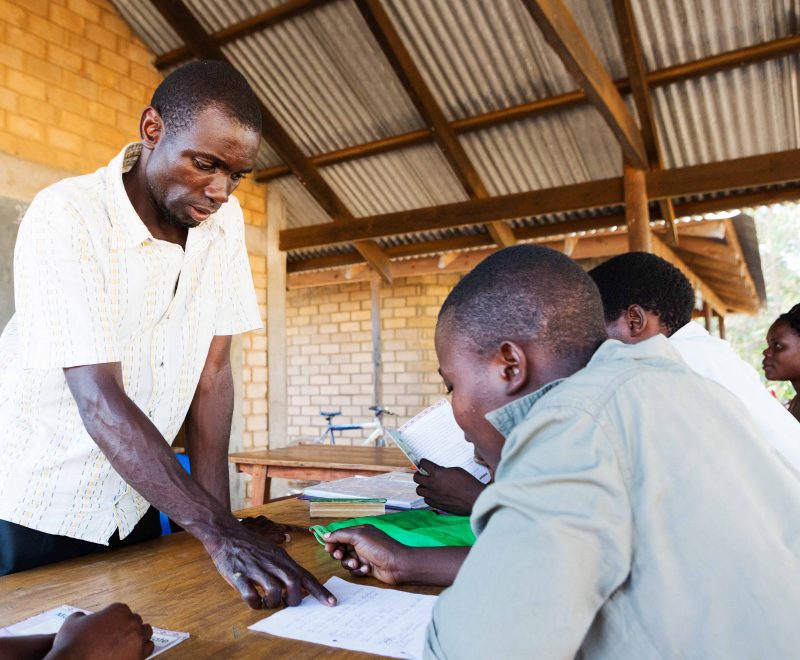 Burton Chirwa is the manager at our Community Library and he also oversees and runs several of the Adult Education classes. He has a passion for writing and has written a number of short stories, one of which is below.

He said, “I started reading novels when I was at a secondary school. I was inspired by Chinua Achebe after I read his novels and that’s when l started writing. My love for reading has made me write short stories.”

Mr Denis George had a wife by the name of Mercy. They were married on twenty fourth June nineteen ninety-two. They couple had two children, Mary and Robin. Things were going well for the first few years of their marriage, but then changed out of the blue because the husband had a lover who he gave all his favours and attention to.

One day Mr Denis George went shopping. He bought two loaves of bread, three packets of sugar, four kilograms of meat, a blouse and a skirt. He put the blouse and the skirt in the same paper bag. The rest were put in another paper bag.

As the clothes were for his lover, he needed to hide them before he got home. In the darkness, he hid the clothes under the maize stalks in a maize field near their home. “These are for Janet! My wife will not find them here,” he said to himself.

However, his wife did catch sight of him hiding something and asked the children what their father was doing. “I’ve seen your father going to the maize field. I don’t know what he’s doing at this hour of the night.” The husband of course didn’t know this.

“Perhaps he had gone to answer a call of nature,” Robin said.

Mrs Denis did not believe her ears.

When Mr Denis reached his home, the children welcomed him with open arms. Mrs Denis gave him dinner. After eating it he went to bed. When he was asleep, his wife told the children to go and find out what their father had been doing. The children accompanied their mother to the maize field. To their surprise they found the paper bag with the blouse and the skirt. They went back home and hid them in a sack of groundnuts. His wife told them not to let the cat out of the bag. “Don’t tell your father about this,” she said. “We won’t, Ama,” the children agreed.

Mr Denis George woke up early in the morning to take the paper bag to his lover Janet on his way to work. He found nothing, much to his astonishment. “My goodness, who has stolen my things?” he asked himself.

He got back home and asked whether his wife or children had found the paper bag. “Who has taken my Indian hemp I hid in the maize field?” They denied they knew anything.

Mr George had no clue as to who had stolen his things. When a month had passed, his wife put on the clothes they had found. Her husband was taken aback to see the very clothes they had hidden. “Where did you get these clothes?” he asked.

“My brother sent them to me,” she said.

Mr George revealed the secret. For as the saying goes: murder will out! “I had hidden these clothes last month. I did ask you as well as the children, but you denied it.” He flew into an uncontrollable rage. “I’ll beat you up,” he said.

“You told me you had hidden marijuana and this isn’t it,” she said. “Does marijuana change into clothes?”

“I’ve said that I’ll beat you up. You are my wife, and should have told me that you had found some clothes in the maize field,” he said.

“I dare say you have a mistress somewhere else. If this is the case you are very unfaithful to me,” she said.

The children interfered in the argument in order to settle their differences.

“Father, you are in the wrong. How dare you do such a thing to our mother! This is a bitter pill for us to swallow,” Robin said.

“Mother is in the right as far as this matter is concerned. We took these clothes and hid them. We didn’t want to tell you. These clothes belong to none other than mother,” added Mary.

Mr George listened to what his children had said and saw wisdom in their argument.

“May I express my sincere apology to my wife as well as you? You know, to err is human; to forgive divine,” he said.

From then on, the family lived happily as the Queen, owing to the new-found loyalty of the husband!

From Burton: “I hope you enjoyed reading this short story. I have other stories that I have written which I look forward to you reading.”