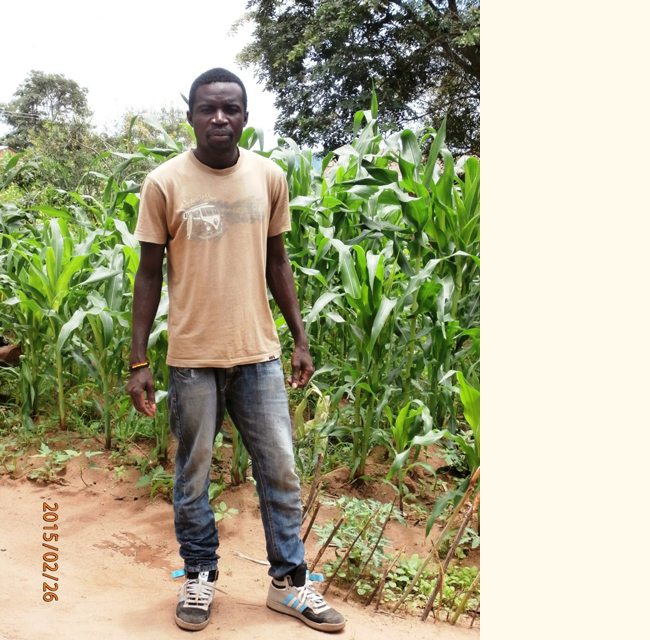 Exploring the Neighbourhood
Faston is a self-employed artist and musician who’s very friendly and knows the area really well. He has happily taken on the role of being our walking tour guide at weekends!

Local Village Life
We had just left Mwaya when Faston suddenly hissed, “Lie down,” and dropped to the ground…a terrorist attack? No, we were about to walk into the middle of a swarm of bees which soon resembled a huge black cloud blocking our way. An alternate route soon had us headed for a narrow path through fields of maize crops. We stopped at a small house to say hello to a tiny little old lady, all brown and wrinkly like a walnut. It turned out we had stopped there because she had a cashew nut tree in her garden and was happy for us to help ourselves! Faston promised to show us how to make them edible later. Onward through fields, and we were soon joined by a crowd of little kids who just wanted to hold our hands, high five or have their picture taken. The kids here are so lively and happy! Our next stop was to rest under trees in a (very) small village of about six houses. It was fascinating to see everyday life and also very impressive to see that all the kids work alongside the adults! There were all ages, old and young, out in the fields, singing whilst clearing weeds with big heavy hoes; some kids were washing school uniform ready for next week, others were taking containers to get water, and two women were pounding cassava into flour. Of course we both had a go at pounding for about five minutes! It was exhausting! Faston got us some raw cassava to try – it tasted a little bit like like coconut. The people we met there were so happy to see us and made us feel very welcome. 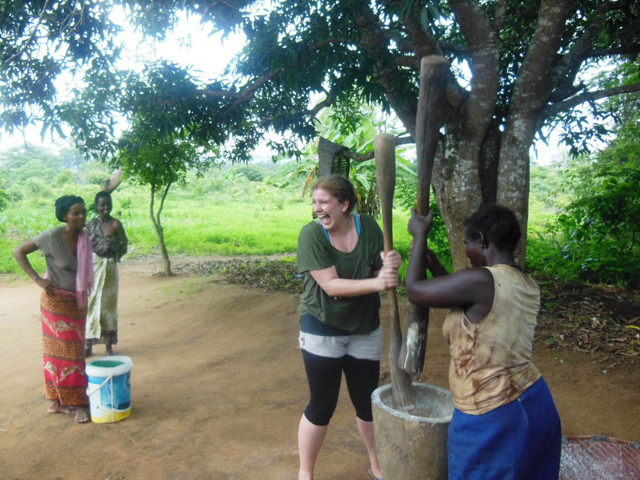 Also in the village, there was a chicken house on stilts with a kind of ramp for them to get in and out.; apparently, they were built because of hyenas which are no longer a threat. 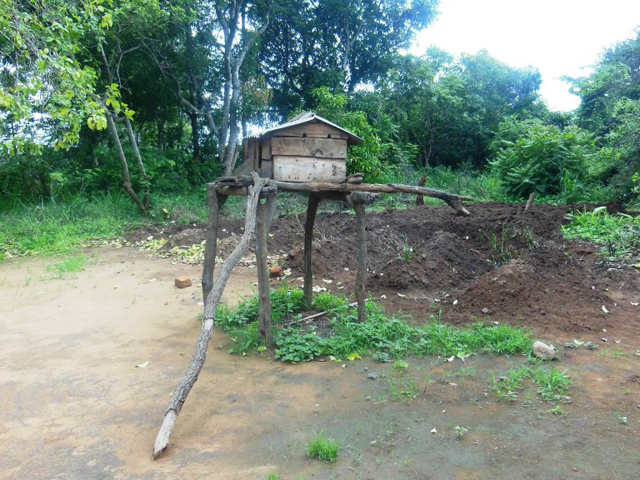 It was getting late so we went back to Faston’s house where he made a small fire with pieces of charcoal and baked the cashew…hmm, maybe it wasn’t cashew and I don’t know that it was edible – that’s all I can say! Then we went back to the beach as we were in need of a cold drink and a swim before dinner.

Mushroom Picking
The next walk was to a ‘mountain’ to pick mushrooms. It wasn’t a mountain, but it was quite a distance to hike through thick sand, planted fields and overgrown woods, and it was pretty steep. It was the same area that Becky and I had both been to when we visited schools, but this time we left the track and plunged into thick undergrowth…eek, snakes, thought I! Along the way, the landscape was a stunning mixture of colours, ranging through orange, yellow, red and brown in the soil, an amazingly deep blue sky and of course every imaginable shade of green. We tramped and scoured the land, but the dastardly mushroom pickers had beaten us to it! We went to visit another delightful old lady who looked like she was in her 80s but was as sprightly as a young thing. Again she was delighted to welcome us into her home and came to help us look for mushrooms…actually she and Faston searched while Becky and I stayed under a tree and talked to her 18 year old grandson and played with the family dog! He was a cool kid…his parents had both died so he left school to come and care for his grandmother and do the farm work for her. 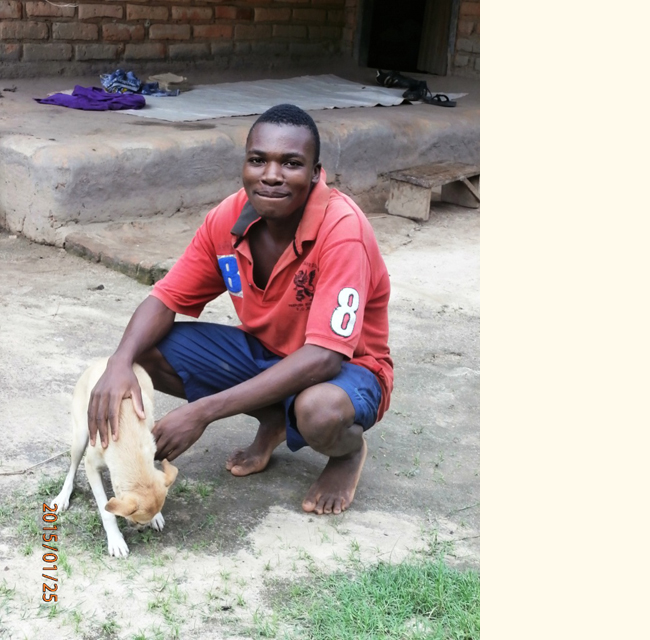 Finally, the elusive mushrooms were located but Becky and I were not allowed to pick any because some were poisonous and they all looked the same to us! (Previously I had got into trouble at Mwaya Beach for starting to eat a raw mushroom – apparently this type of edible mushrooms is poisonous when eaten raw and could kill you so it has to be cooked!) By now it was getting late – we were all tired but happy, and we finally headed for home with a basket of mushrooms.

A Walk to a Viewpoint
Last weekend, I requested a walk under trees! The first port of call was Faston’s house so he could eat lunch and also collect his cousin who wanted to join us. I shared nsima and pumpkin leaves with the men, but I didn’t realise until we left that the women were eating on the other side of the house. Faston has a mulberry tree and a passion fruit tree in his garden, and the corn on the cob is almost ready to eat…yummy! I will definitely be back there to eat! Once lunch was over, we headed off and passed many small houses along the way where people had planted flowering shrubs and flowers around the walls. They looked too pretty to be real! There was even one house painted in bright colours which was just stunning – this is very unusual because paint is expensive. 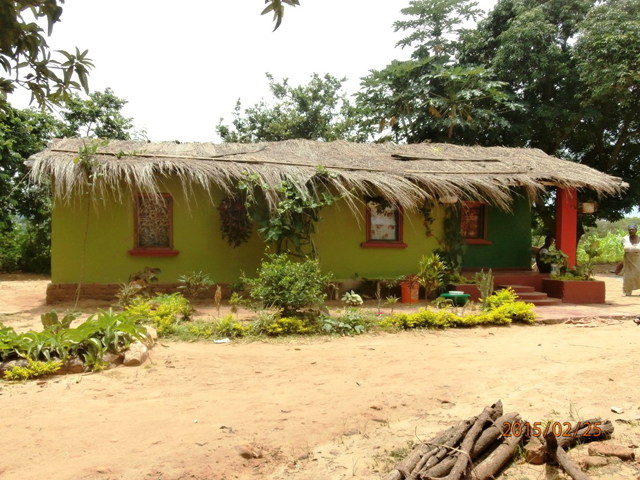 As always, we were greeted by everyone and joined by lots of little kids. Then we hit the trees and started to climb – this was when I was told we were climbing a ‘mountain’ which had spectacular views. Actually, it wasn’t a hard climb as water erosion had dislodged rocks and created a natural staircase. I was just getting breathless when we reached the top and, yes, the views were lovely. I could spot the road I cycle down almost daily to get to Mazembe Primary School and, in the distance, I could see Kande village and, in the further distance, tiny villages dotted on the landscape. It was interesting to get a bird’s eye view of what is by now a very familiar route. We stopped there for a while to rest before heading back, and I got to the beach just before nightfall which was lucky as I didn’t have a torch and darkness is swift! I’m looking forward to the next expedition, although Faston has mentioned climbing a real mountain! 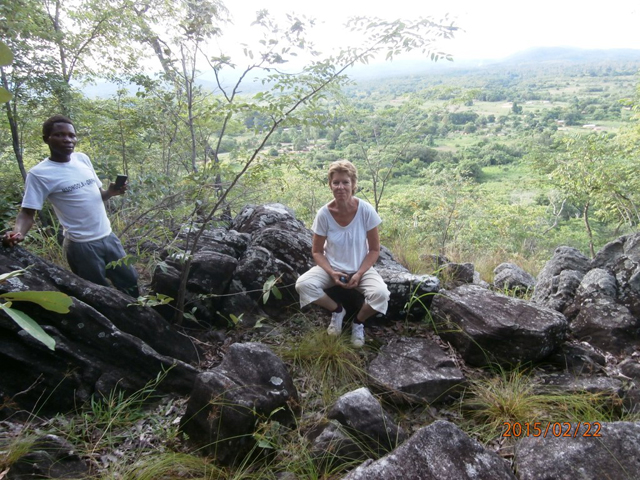