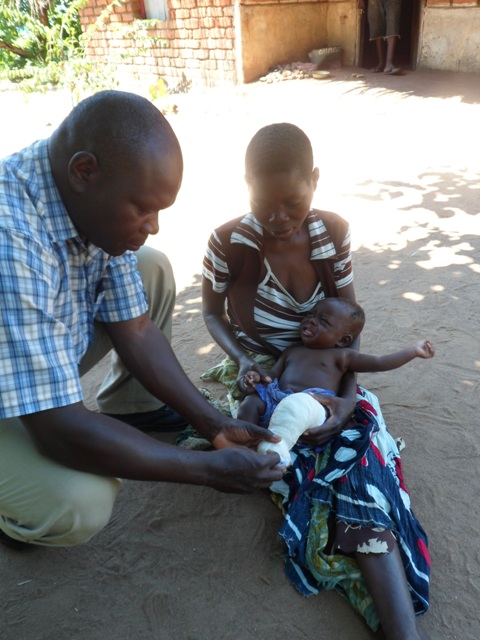 After hearing many stories about Malawi from my sister and brother-in-law (Ama Susie and Ada Neil… also known as Susie and Neil Fleming, employee and Trustee of RIPPLE Africa), I finally bought some malaria tablets, suncream and packed my swimming trunks and made the trip to Mwaya Beach. As my first week coincided with the visit of Toby, as well as Susie and Liz’s first week back, I was fortunate to see a number of different projects in operation, and to gain a much fuller understanding of the work in which RIPPLE is involved. After an eventful first week, I was ready to muck in and get involved.

On Monday I spent some time with Collins, who runs RIPPLE’s Disabilities and Rehabilitation Project, visiting a number of his patients including a child born with a club foot, one with brittle bones, another with knock knees, as well as one who was previously unable to walk. Collins explained their conditions to me and the progress which his work has had on them. All had made significant progress which impacted not only on their physical and mental well being, and that of their families, but crucially, his help allowed them to return to school to continue their education.

On Tuesday, I joined Catherine, Precious and Mike in visiting some villages (near Kande) to monitor how the Changu Changu Moto project was progressing. The results were mixed, with some community members fully embracing and already benefitting from the project whilst others needed some gentle cajoling into maintaining their stoves. The crowning moment of the day came when Mike and I narrowly edged a victory over Catherine and Precious in a “Changu Changu Moto Off” (if you’re not familiar with what this is, it’s a contest to see who can construct a robust, functional yet aesthetically pleasing Changu Changu Moto the quickest). Don’t worry if you haven’t witnessed one yet, it’s surely only a matter of time before it becomes an Olympic sport.

On Wednesday Kate and I showcased our vocal abilities with a few renditions of “Ten Green Bottles”, “The Wheels on the Bus”, and the “Hokey Cokey” among other crowd pleasers (no, it wasn’t karaoke night, but a morning session at Mwaya Preschool). We’re currently locked in negotiations with recording labels and hope to have an album out by autumn. We also put up a swing for the children to play on which was a complete hit!

Thursday saw me join Mike and Catherine in Katentere for the inaugural meeting of the banana club. This project aims to create a community garden where banana trees are planted and maintained, which can then be eaten for lunch (to cut down on the use of firewood), as well as providing a nutritious lunch for the community. Any surplus bananas can be sold and the profits shared amongst the community. By early afternoon we’d managed to clear an area of land for the community garden as well as construct a compost box made of bamboo. I am pleased to add that despite a number of workers brandishing “slashers”, axes and machetes over a number of hours in searing heat and with little water to hand, the only injury to the whole community was a minor cut to the lip which Mike sustained on a blade of grass.

On Friday I joined Kate and Rose at the Under 5’s Clinic, which is a special weekly clinic for children under the age of five, as well as for their mothers. The morning began with some singing (nope, not Kate and I, our contract negotiations have stalled and we’re now in a stand off with the recording label – I’ll let you know how that one goes) by the mothers attending with their babies. I casually remarked how quiet and well behaved the babies were, which, in retrospect, was incredibly naïve. Over the rest of the morning the children were weighed and those due for vaccinations were provided with what they required. I very much enjoyed my stint as “clerical medical assistant” and feel that I proved that despite a shaky start, I can wield a pen with the best of them.

Anyway, must dash now, the sun is setting, and from the kitchen there’s the aroma of fresh curry and the pleasing sound of clinking glasses.