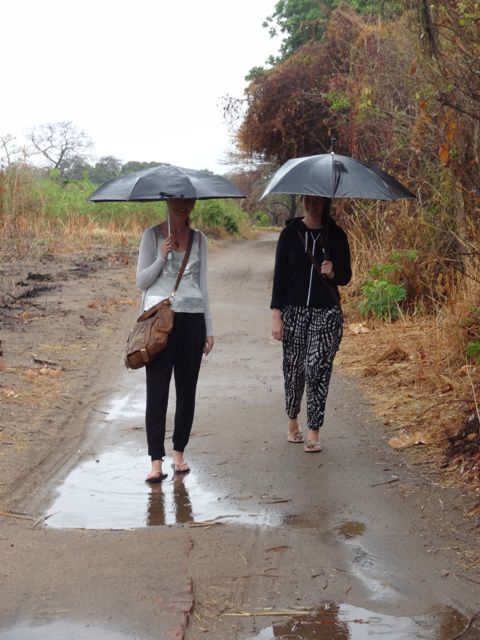 Did we just miss the Monday deadline by a few minutes? This week, your “early hours of Tuesday blog” from Peter:

“Water, water, everywhere ….. and not a drop to drink?

Happily the week has ended with a welcome return of sunshine after 3 days of somewhat premature rain (we were promised that the rainy season was not due for at least another couple of weeks!) Although the rain does not make it that much colder it does of course mean that there is no solar power, which is critical to recharging those vital implements such as mobiles and laptops – and the water pump. Fortunately living on the shores of the lake means that there is no shortage of water and the girls have quickly become adept at washing their hair in the lake.

Although those of us from the UK and Ireland are not exactly unused to rain it is amazing to see the different ways in which it impacts on life out here:-

• One of the most welcome benefits is that it dampens down the many fires started by the locals who insist on clearing areas by burning everything in sight.
• Those who aren’t starting fires spring to action and start digging to prepare the ground for planting.
• Insects such as flying termites emerge from the ground much to the delight of those who collect them for the cooking pot. The local lizards also enjoyed a feast of flying ants that generously hovered just above ground level.

• There is a rush to put roofs on new buildings before the walls constructed of mud bricks disintegrate
• Attendance at the monthly baby weighing clinic is markedly reduced although that didn’t stop Katie, Clare and Marilyn getting very excited about the prospect of getting involved.

• The volunteers suddenly become more interested in indoor games. A Poker school, instigated by Polly and Jess, has attracted a lot of interest although as yet the stakes remain nominal and the chips are largely bottle tops. A major hit has been Bananagrams – a game loosely based on Scrabble.
• When it is not water falling out the sky the mangoes have also started to fall to the ground with a very regular thud – so beware when walking or sheltering under trees.

The biggest excitement of the week however was a trip south to Ngala Lodge – about an hour away – for pizzas on Friday evening. We needed 2 vehicles to transport everyone on the return journey as the plan was to meet Grace, Lindsey and Ashley as they had come to the end of their break in the south of the country. After a great evening we set off in the dry, only for the rain to come down very hard just a few miles from home. So not only did those riding in the back of the truck get wet, the truck itself had to be pulled out of the mud as the track to Mwaya had become very slippery.

The return of the sun on Sunday meant a more relaxing day for most – a day that was rounded off with drinks on the beach – where we seem to have attracted some of the wildlife (or could that be Charlie, Susie and Ashley in disguise?)

And yet another great meal developed by Geddess, supported by Martha and Fabiana!

Once again we could eat alfresco, overlooking the lake rather than cowering indoors away from the rain. The entertainment on the beach that followed was led by some of the local students- although it largely involved everyone else making fools of themselves dancing around a bonfire. At least the Brits could satisfy themselves that they had participated in another celebration of Guy Fawkes, although there weren’t any fireworks – no-one in Malawi having yet felt it necessary to blow up the parliament building in Lilongwe!”