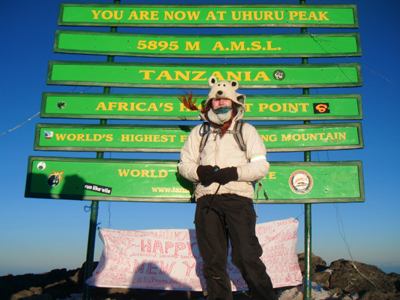 RIPPLE Africa star fundraiser, Emily Dynes, reached great heights on 3 January 2012 by climbing the top of Mt. Kilimanjaro, and raising over £3700 for RIPPLE Africa in the process!

Emily’s story is an inspiring example of how the hard work of a single individual can result in a huge difference to the lives of so many on the ground in Malawi. Unlike many of our community fundraisers whose link to RIPPLE Africa began through their volunteering experience in Malawi, Emily’s story is different. “I found RIPPLE Africa just by searching over the internet. I was looking for a charity doing astounding work either in Tanzania or in a country in that region of Africa. It was important to me that I chose a charity working in Africa rather than the UK as it was going to be the African people and their wonderful landscape that gave me the opportunity to go on this adventure. I searched for a relatively small charity that was somewhat unknown to the general public so I could raise awareness for the charity. I found a charity where I thought the money I raised could make a difference to a variety of projects; environmental to schooling to healthcare.”

Selecting RIPPLE Africa as her chosen charity was only half the challenge, as in addition to fundraising, Emily had to make sure she was fit for the climb, too. The trek itself was a difficult 6 day hike through snow and rain, with a 4.5 day climb to the summit, including a challenging final 6 hour climb through the night by torchlight to reach the summit at sunrise. Emily booked her journey through Action Challenge, a company which specialises in organised challenge events. She met other members of her group at the airport who had also signed up individually, but soon became a close-knit team, assisted by the help of professional guides. The fundraising however she had to organise on her own, doing everything she could think of to raise money: “I raised the money by standing in the tube stations with a bucket and a sign, explaining what I was doing. I work at a bar and luckily my boss is awesome and allowed me to put a collection pot on the bar. I was also able to do charity raffles on busy nights and even did cake sales and a sponsored silence- which when you work on a bar is not easy! All this on top of donations from family and friends meant I was able to raise a total of £3745.52.” 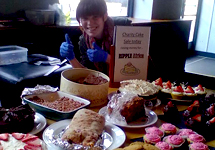 RIPPLE Africa is proud to have people like Emily working hard to support our charity, and we’re glad that the experience is equally fulfilling for her, too. “Overall the experience has been invaluable. It takes a lot of hard work to raise that amount of money and it was disheartening at times but always rewarding in the end. The trek itself was indescribably beautiful. It was worth the long days of hiking in the rain and snow, soaked through to my underwear to reach the magnificent views of the summit, meet so many wonderful people and make friends that I’ll share the unique experience with forever. I’d recommend anyone who has ever thought about taking on an adventure, such as my journey to Tanzania to climb Mt Kilimanjaro, to raise money for charity to just do it. You won’t regret it and RIPPLE Africa is a fab charity to raise for.”