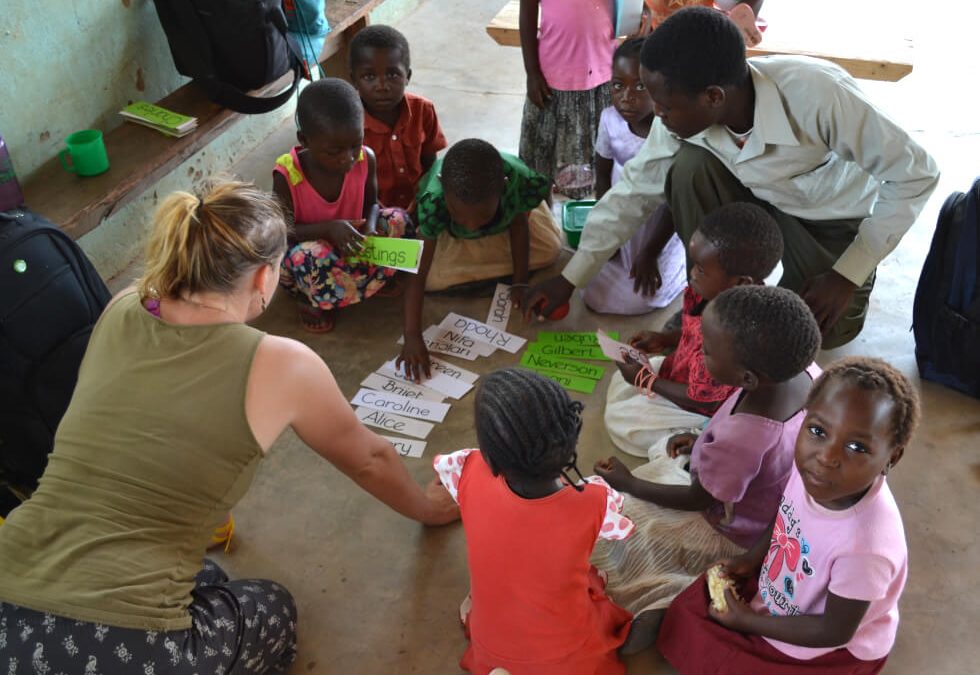 Tom Ridley, boyfriend of recent volunteer Natasha Mladek, has written a story about his time at Mwaya which is reproduced below. Stories written by other previous RIPPLE Africa volunteers can be found on the Volunteers’ Stories webpage.

So I left London Heathrow while it was 5° and arrived in Malawi with it around 23°. After almost an hour spent sorting a visa, grabbing luggage and changing money I headed out of the front to find my taxi driver. As soon as I walked out I was bombarded by 3 offers of a taxi. I kindly declined and headed towards Chico holding a sign with my name on it. Chico is a lovely, chilled out and friendly chap who helped me with my bag to the car. And we’re off on our four hour drive from Lilongwe airport to Mwaya Beach on a sandy and pot-holey dirt road.

After being worried the roads would be the same the whole way for less than 10 minutes, I relaxed as we hit the smooth tarmac. This was enough to help me drift off to sleep after two sleepless flights. I woke a few times to watch the scenery fly by as Chico pelted us along the road, not even slowing for other cars, trucks and goats or people on foot and on bikes. Despite a few near misses I managed to keep slipping into dreamland. [Editor’s Note: You can ask him to drive more slowly if you’d prefer!] We pull off the main road onto another sandy road and I know we must be close. Five minutes pass and we pull around a corner arriving at a small brick building and patio area covered by a tin roof. I see many smiley faces heading over to greet me. I met lots of people at this point, all of them lovely and friendly.

The weekend began very relaxed; sunrise at around 5:15am and we’re up and in the lake. A great start to the day, although a little cold. Let the slow, two hour breakfast begin before ambling into the rest of the day which comprised of exploring the local area, swimming, reading, a little drinking and eating, meeting new arrivals, Mark and David, and sleeping.

Repeat this for Sunday, minus the morning swim (and meeting new arrivals) and adding a lovely evening of drinks down at Lowani, where we spotted a hippo swimming by in the lake. The locals were making lots of noise and we thought it may have been a crocodile until the characteristic yawn gave it away.

Monday; David, Mark and I head out on our newly acquired, squeaky bikes, led by Dan (Volunteer Projects Manager). Dan is a kind, relaxed guy who is very passionate about what he does. Dan took us to Mwaya Preschool, the local library, Mwaya Primary and Kapanda Secondary School. The preschool kids were extremely cute. They were learning the alphabet and practising their greetings (in English), followed by some singing and dancing in Chi Tonga (the local language). All three of us introduced ourselves and also ended up showing off our terrible “Dad Dancing” skills. After being torn away from the little terrors, we climbed back on the saddle. Next we explored the small local library, run by a man called Burton and a few of his helpers, one of which was called Scorpion. We never found out why…

Mwaya Primary is right next to the library. Hung over the Headmaster’s office is a board that reads “Teach the girl child and teach the nation”. This resonated particularly with David who relished the idea. We then proceeded to be introduced to a few different standard classes ranging from ages 6-18. The first class had around 20 students, which they call learners, all sat on the floor being taught songs about body parts, in English. The following class was a class of 201 learners, again sat on the floor. The classroom was about 10m2 and was full, with just enough space for the teacher at the front. All the children are always so happy to see you as ‘Azungu’ – white man, especially when you have a camera.

We also saw a class lucky enough to have desks and benches. As we entered they all stood up and we were greeted politely. “Good Morning Sir”. 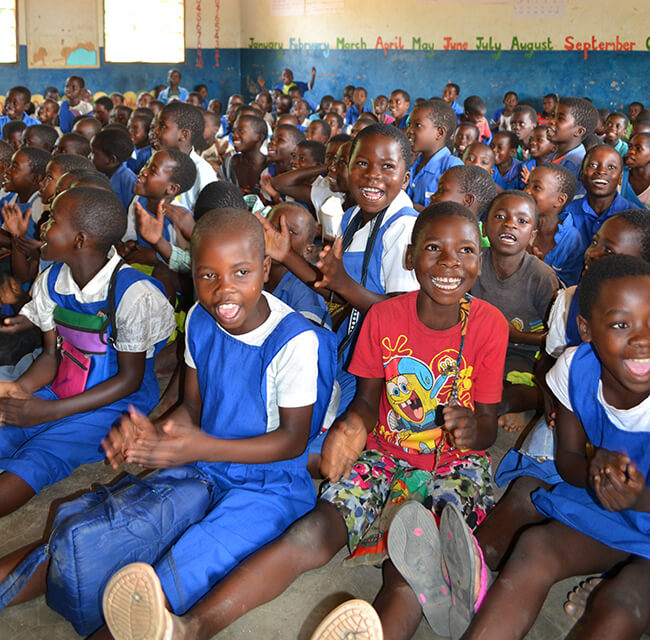 Our day then took us up and out through Matete to another school, Kapanda. On our way there we stopped for an impromptu lesson on how to crush dried Cassava. A lovely lady showed us how she uses the giant pestle and mortar, and then gave us a go. After this mini workout we spent the next hour or so at Kapanda; meeting classes, seeing their boarding accommodation, water pump and new, half built kitchen, a great addition to the school. 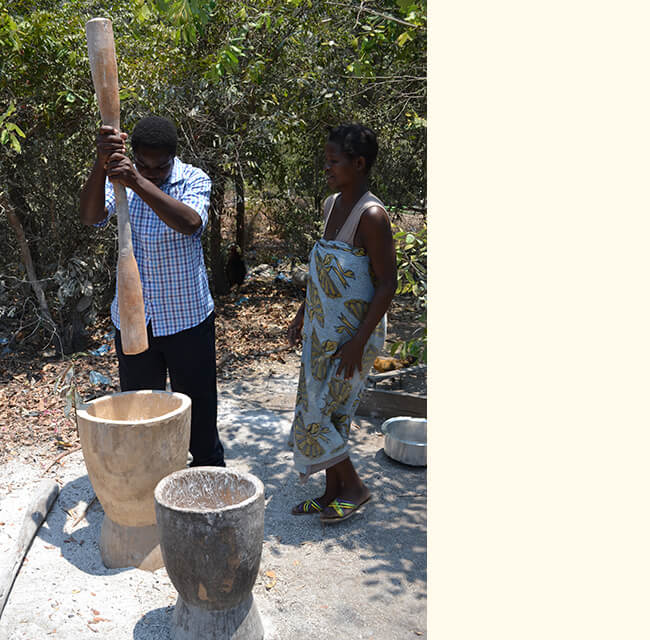 Our morning ended with a cycle back to camp via the local grocery store for a cold Fanta in a glass bottle. My favourite is the Passionfruit flavour. Due to lots of cycling in the hot and sticky weather a dip in the lake was the next activity on the agenda, after lunch. Swimming in the lake became a regular thing, despite the hippo sighting we had over the weekend, as well as waking up to watch the sun rise.

Another thing that became regular was the drinking of Gin and Tonic in the evenings; an enjoyable, refreshing beverage to be consumed before and during a dinner in the dark, a concept that worried me a little as you can’t see what you’re eating. It turned out this isn’t an issue when everything on your plate tastes fantastic! Martha, Geddes and Fabiana did such an amazing job with the food they cooked. Pumpkin burgers were a particular favourite of mine.

The rest of the week was full of cycling from school to school in the scorching 30-40° heat, as we had been given the task of collecting personal profile information from all teachers and taking lots of film and photos. We were collecting this for RIPPLE Africa to start a school twinning programme with schools in the UK and USA. Towards the end of the week, Tash came with us on one of our trips. We all managed to get a little time, alongside collecting information, playing with the children, teaching them songs, kicking a ball around, doing magic tricks and more. All great fun and the kids loved it.

We were also shown the tree conservation area and taken around a few local villages looking at Changu Changu Motos. This shows you how the majority live, a real eye opener for living conditions. Some houses made of brick, but most made from wood, sticks, mud and tin roofs. Cooking on fire everyday cannot be easy. Just a different world.

Being so busy and having so much fun, made the week fly by, ending with another nice drinks session at Lowani. Before the drinks, Nikki and I headed down early to see Esther and her family, who live at/run Lowani. We took her Grandson for a bit of a swim and some playing in the sand. Building a sand castle is not very easy when all the little one wants to do is pretend to be Godzilla!

Before we knew it, it was the weekend. On Friday Tash and I had booked ourselves into Kachere Kastle, an amazing hotel right on the beach. A beautiful setting for some relaxation. The owners were a lovely couple from England; they made us feel so welcome. We explored, swam, drank and laughed all before dinner. Dinner was amazing. I had a pea soup and a Thai style stir fry, Tash had chicken pâté and an Italian pesto pasta. We were so full after dinner that we had to go for a little walk which, surprisingly enough, ended up at the bar. We sat and talked the night away with the owners, learning all about their journey and how they came to build such a beautiful place. Fun fact: They used just over 802,000 bricks to build the castle.

The next morning we woke at sunrise, again, a little groggy. The sunrise was a little disappointing due to a little cloud cover, but stunning nonetheless. A return to bed for a little more sleep rejuvenated us and helped with the slight hangover before the rest of the volunteers came up to join us for lunch. We had a lovely rest of the day and enjoyed a brilliant tapas style lunch. A short cycle back and it was almost dinner time. G&T’s poured, food eaten, bed climbed into. An early start tomorrow.

Sunday 4:30am. We woke early to all bundle into the truck and be transported to the foot of the local mountain about a 40 minute drive away. I won’t go into detail as Tash has pretty accurately described this activity in a previous post. It was a very tough climb up and even tougher to get back down, but we survived, just. Back to camp for our famous post-activity swim. The rest of the day was very chilled. The perfect end to an unbelievable, packed full, insightful, inspiring, intense, fun-filled, adventurous visit to Malawi. I left early Monday morning and arrived home early Tuesday to a cold and wet England. Back to reality.

Thank you to all those who made my experience what it was and thank you to Tash for going out in the first place, and inviting me out.