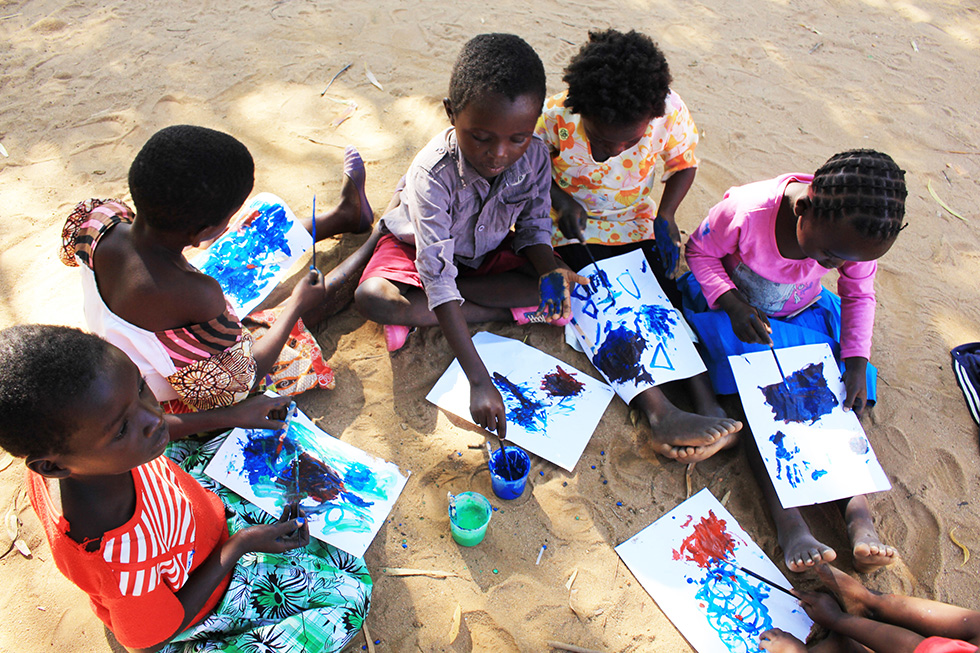 Recent volunteer midwife Sophie Nancarrow has written a story about her time at Mwaya which is reproduced below. Stories written by other previous RIPPLE Africa volunteers can be found on the Volunteers’ Stories webpage.

Arriving in Malawi mid-February this year as a registered nurse and newly qualified registered midwife I had no idea what I would face and how I would cope with a world so different. A place which I assumed had more challenges than what we faced in the western world with fewer options of adaptation.

Having travelled near and far before I was excited about the idea of exploring a new place so different from my home and so different to many places I had travelled before. Arriving later in the evening than expected to Mwaya, I didn’t feel an ounce of worry or uncertainty with the volunteers already here, excited for a new member and the night watchmen eager to help with my bags.

Instantly knowing you’re somewhere safe, comfortable and homely is wonderful. The next day I met with Dan who introduced me to Charles, the preschool co-ordinator who was going to spend the day showing me around. We mounted our bikes and headed off. Over the next few days I was shown around the villages close by, the schools, clinics and the key places to remember. I was initiated into the world of minibuses and thankfully remembered how to cycle well enough.

After the first week of taking it easy with orientation and then tagging along with the other volunteers to gain more of an insight into how the Malawian world worked I headed off bright and early to Chintheche rural hospital the following Monday morning.

Having only really met the matron and two medical officers, I wasn’t sure who I was to head to when I arrived, but I felt comfortable knowing I could ask anyone really. With that known I headed to the maternity unit to introduce myself and see where I could settle in. Monday morning is one of the busiest days which the maternity unit has with the initial booking visit for all pregnant women.

Probably the most overwhelming sight to see as a green volunteer is over 100 women sitting eagerly waiting to be seen. I quickly introduced myself to the two midwives working that day and asked where I could help. I was quickly sent to the antenatal clinic where I’d seen all those women waiting eagerly and set about taking blood pressure, heights and weights to lighten the load of the sole midwife running the clinic. With that said I quickly settled into a routine at the clinic. Welcomed by all, and encouraged by most I felt comfortable knowing I was becoming part of the team.

The week followed as such; Monday to Friday I would cycle to Kande, or Chituka to catch the minibus into Chintheche normally heading off between 6.30-7am to arrive at the hospital anywhere from 8-9am (I always seemed to get the minibuses who liked to take small detours around). I would spend the morning Monday, Tuesday doing the antenatal clinics, Thursday and Friday where a mix of antenatal and family planning, to spice things up a bit.

The clinics I soon learnt did not run on public holidays, even if it was just a school holiday really, and if it was raining, there was no need to rush as no one would come until after the rains had stopped. This was handy as I’d often be caught in the rains halfway to work. The afternoons I would either spend on the labour ward or I would travel to the disability groups, whether it be in Kachere, Kande, Chituka or Mwaya. On the days when it was busy I would often be at the hospital until 3 or 4 pm and then I would slowly make my way home.

Wednesday held a different clinic, one which I was expecting to find here, cervical screening. Having spent 6 months working in the gynae clinics at home I was well versed with cervical screening and what to look for. This meant my Wednesday mornings were spent assisting in this clinic when it ran. If the clinic wasn’t up and running that day I would spend my morning in the labour ward.

During the first three months of my volunteering there where two German doctors, Karl and Gabi, who had been volunteering there time on and off for the last two years, setting up an emergency theatre. The theatre was predominately used for emergency sections and hernia repairs. This meant that during my first three months I would often assist in the theatre with any sections. As the supplies were limited they were only able to perform caesarean under general anaesthetic which often meant baby needed a little bit of assistance when they were born. This was one area of care which I noticed needed a little bit of assistance. I set about focusing on this area of care when the situation presented. I worked one on one with the midwives and nurses which meant I could take my time showing them the correct positioning and rate.

Throughout the 21 weeks spent working at Chintheche rural hospital I learnt more than I thought imaginable. Often we wouldn’t have supplies delivered by the government or what should be delivered wasn’t and we had to adapt and be creative. I learnt how to improvise for catheterisation and cord clamps. These are things I never expected to learn how to do.

I worked closely with many of the midwives particularly two wonderful women, Julie and Ruth, who have both now retired (though both still keep coming back to work!) These wonderful women took the time to answer all my questions, whether it was related to how they adapted to working in the rural hospitals after completing training in the city hospitals to cultural norms. They were happy to answer any and all questions I had, showing me the key skills I needed to be a midwife in Malawi. I learnt how to make chitenge pads for the women post-delivery, which would be worn for the next week. I learnt who was involved and how the women where cared for after birth and what I could do to help. I was able to show the staff how to assess babies sucking reflex and alternative positions to labour in.

The staff were always welcoming although we had some challenging days when things didn’t go as planned. I watched how women coped with loss, and the compassion shown by the Malawians. I was always encouraged and able to share stories and a different way to see the situation, which is vital in any setting. The medical officers although majority of the time had nothing to do with the maternity unit were sometimes called upon when referring a patient to the district hospital and reviewing when we were uncertain of the situation. They were happy and helpful, respectful to both women and staff and understood midwives here know best. The respect for staff members was amazing.

From a world of bright lights and loud beeps in the western world to the quiet calm go with the flow nature in Malawi I couldn’t imagine a more welcoming experience and exposure as a new midwife.

My home at Mwaya. What more could you want really, the staff here become your parents, of which you have many sets of. They are welcoming when you’ve just cycled in from a long hard day, will give you a hug or two when you’re down without even saying a word. Or if you’re missing home they will come and sit with you, making sure you’re okay. I couldn’t think of a nicer more homely environment to be in. The wonderful cooks and housekeeping staff keep you on your toes with their cheeky personalities and kind, caring, warm hugs. While the gardeners and watchmen watch over you and look out for any obstacles which may be in your way.

For a first time volunteer I couldn’t have thought of a better way to start. I’ve had such wonderful opportunities at all the clinics along with the hospital, the disability groups as well as the pre-schools. I have all the support and encouragement under the sun with both the staff at Mwaya along with the wonderful supportive staff in the UK. I even had the opportunity to explore the surrounding areas, making the Easter long weekend into a little get away to Likoma Island, a grand adventure I thoroughly recommend and making the trip up to Livingstonia as I come to the end of my time here.