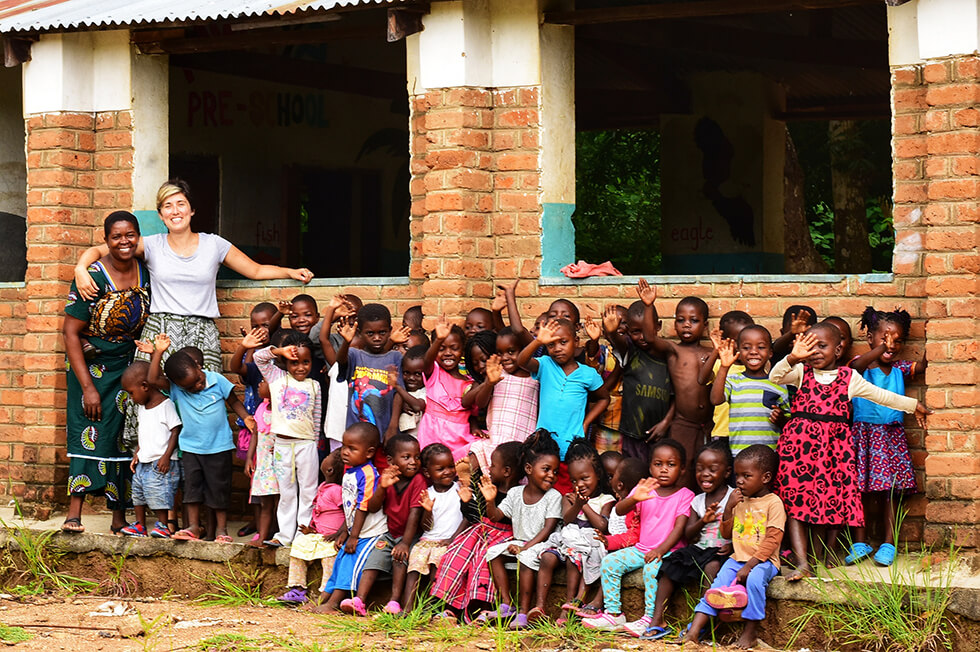 Teaching volunteers Kade and Emma have written a story about their time at Mwaya which is reproduced below. Stories written by other previous RIPPLE Africa volunteers can be found on the Volunteers’ Stories webpage.

With incredibly limited volunteering experience behind us, it was a little bit daunting traveling halfway around the world to volunteer in a country that has plenty of warnings behind its name.

But upon arriving at RIPPLE Africa after a nearly 10 hour taxi drive from Lilongwe, our fellow volunteers made Kade and I feel incredibly welcomed, which certainly helped relax us into our surroundings.

Arriving on Friday evening, we were able to explore the area over the weekend before our introduction with Dan on the following Monday morning.

Fellow volunteers, Alistair and Doreen, took us under their wing, and not only helped organize bikes for us, but familiarized us with the staff, several towns and routes to take. Come Monday, we felt better prepared for the week ahead. We were really grateful for their help, and were sad to see them go only after a couple of days after our arrival.

While both of us were interested in the teaching sector, and thought that our main focus would be the older students at Mwaya Primary and Kapanda Secondary School, it was the younger children at the Pre-Schools that really captured our attention.

The enjoyment of learning new skills, games and dances was contagious, and after a couple of weeks in, our mornings were soon taken up with being based at Mwaya Pre-School. Colouring activities, and games identifying shapes and colours were implemented, using the resources that we found at Mwaya Beach.

The relationships formed with the teachers, in particular Rebecca and Messi, were also rewarding, and the tea and sweet potato shared at the end of the school sessions was highly looked forward to.

With Kade assisting teachers at Kapanda Secondary School, as well as taking several social studies classes, I was able to associate myself with the English teacher, Birgit, who was based there under Peace Corps. We were able to take a couple of her classes when she wasn’t able to be there, and I assisted her with the newly established English Club.

Using my journalist background, I introduced to the students the role of media in today’s society, in particular, the importance of newspapers. Over five weeks, students were able to identify the structure of articles, different forms of media and their importance, and were able to create their own front page (in hope of stimulating the formation of a school newsletter). This was done by myself purchasing a collection of newspapers, and cutting them up to create headlines, photographs to go with articles the students had written themselves. I provided them with glue and scissors, as well as the card that they used for their front page.

English club is held after school hours, and the students who attend are really enthusiastic about attending. To see the joy and creativity that this simple task brought out in the students, with the limited resources available, has been the highlight of my time at RIPPLE. The skills that were learnt through this project will help benefit these students as they go into essay writing, and I hope that new volunteers are able to continue on with assisting at this recently established group, and bring new ideas to help assist these students in the near future.

With most of the teaching done in the morning, that meant our afternoons were left free for sports.

Netball, soccer, and volleyball were just a few that we took part in, and Kade was able to introduce baseball to the students at Mwaya Primary School. After a couple of sessions, the students were able to understand the concept and began to enjoy the game.

Five weeks came and went extremely fast, and it was time to say goodbye, but not before we had several items of clothing made by local dressmaker, Patrick, for presents back home, and attended church.

The great thing about RIPPLE and Mwaya Beach is that while you able to have your own space, you are also made to feel part of a family unit, and saying goodbye to fellow volunteers, and staff, was hard. In particular, our master chefs Geddess, Fabiana and Martha; their dishes could give Gordon Ramsey a run for his money, and their sense of humour was fantastic.

Thanks RIPPLE, we have enjoyed our time here, and while our short stay meant that ‘change’ was seen, we felt that our skills shared and our time invested would help those who took them onboard in the near future.