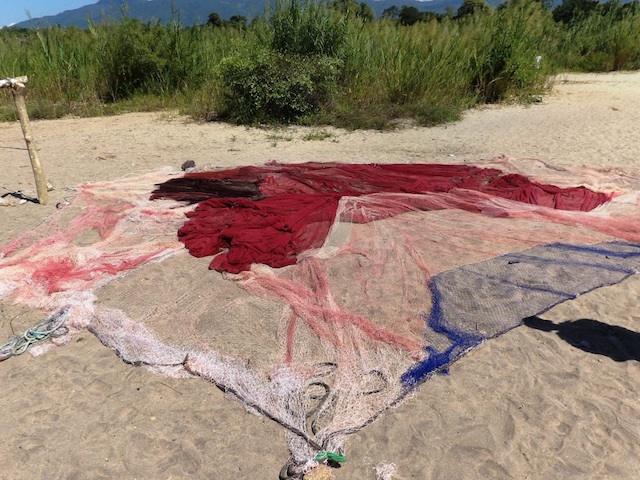 Well, thanks to Will and Susie for setting up the story so far and explaining in quite some detail about the medical aspect of life out here with RIPPLE Africa! In this blog, I was hoping to give a bit of a brief update about the fishing conservation project and what has been achieved in recent weeks.

Let me first start by saying that, for me, the week got off to a rocky start. On a routine cycle back from Kande Beach, I got a dragged into a bit of a cycle drag race with two teenagers. I was almost certainly winning until my chain decided to come off. Now at slow speeds this might have been OK but, unfortunately for me, we’d built up a bit of speed on the downhill segment of our own personal ‘Tour de Kande’. I’ll leave out most of the gory details but after a fall at high speed onto tarmac (that was not built for comfort!), I ended up with a few holes in both feet and a broken pair of flip-flops … and little toe!! Thanks to Susie’s meticulous wound care, I’m now back on the bike (so no need to worry, mum!!) and training for my next race.

As a keen angler back in England, I had always been interested in RIPPLE Africa’s fish conservation project and, before we flew out, it was certainly something I was keen to become involved with. We all know about declining fish stocks around the world and, thanks to the highly successful Fish Fight campaign, pioneered by Hugh Fearnley-Whittingstall, they are steadily improving in the shores around Britain and further afield. But what about the fish of Lake Malawi? Stocks have been declining rapidly over the last few years due to over-fishing, and the Malawian Fisheries Department has been powerless to halt the decline due to chronic underfunding.

My first exposure to the fish conservation project was at RIPPLE Africa’s office in Chintheche a couple of weeks ago. Susie and I hitched a lift with Geoff and spent the day sitting in on a highly productive meeting. The Nkhata Bay District Fisheries Officer and his deputy were both present, as well as a couple of enforcement officers and, of course, Geoff and Force from RIPPLE. The day was long but, at the end of hours of encouraging conversation, the basics of the project such as target species, closed seasons, and accepted net types, sizes and lengths were well on their way to being decided.

A brief guide to the fish and nets employed in Lake Malawi, and more specifically Nkhata Bay District. From smallest to largest, the main fish caught here are usipa, utaka, mayera, and chambo. The nets currently employed range from 0.5’’ to 5’’ with two main types of net: chilamera and gillnet. These nets are employed from dugout canoes, apart from the chilamera which is used to catch usipa and is normally cast from a larger boat. Currently, any fish at any stage of life is caught and this includes chambo young in mosquito nets (despite this already being illegal in the whole of Malawi!!). There is a still a lot to do but RIPPLE Africa is well on the way to getting it done. 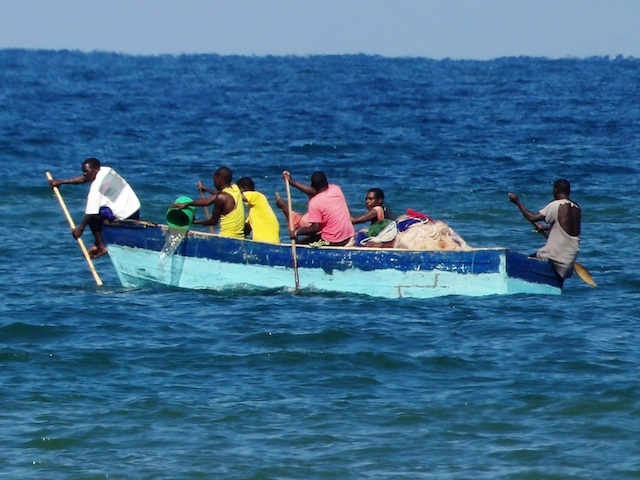 Between Monday and Thursday, I busied myself in the clinics and at Kapanda Secondary School, where I held a thoroughly enjoyable Biology revision session (the teenagers here really are fantastic and so keen to learn). On Friday, however, I had my first experience of the fish conservation project in action in the communities. The morning was spent at Mwaya Beach with the District Fisheries Officer and some of his colleagues, setting out the finer details of the project and making sure everyone was “singing from the same hymn sheet”. Following lunch, we set off for the mouth of the Katenthere river, a modest fishing village. Here, as well as encountering tens of excited children, we caught our first glimpse of the chambo young and the fishermen who protect them. We were introduced to the Conservation Committee who proudly showed us around their chambo breeding area and demonstrated how they fed the young fish on a strict diet of nsima and cassava. The District Fisheries Officer was delighted with the progress and even more impressed with the children who, when asked for a mosquito net, confirmed that it was illegal to fish with one as the fish needed to grow to adults before they could be caught. 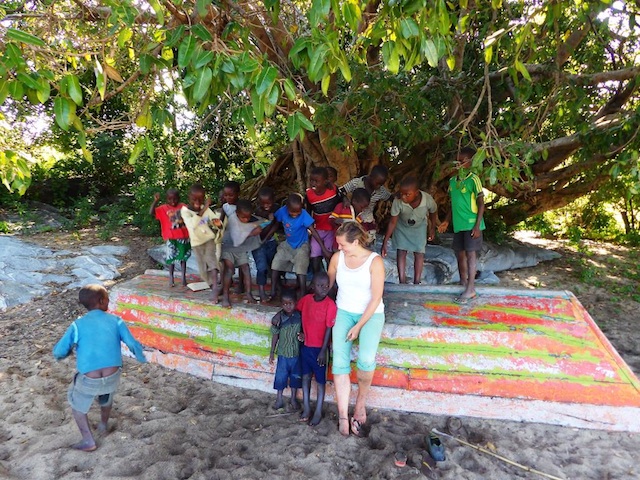 Susie with children at Katenthere 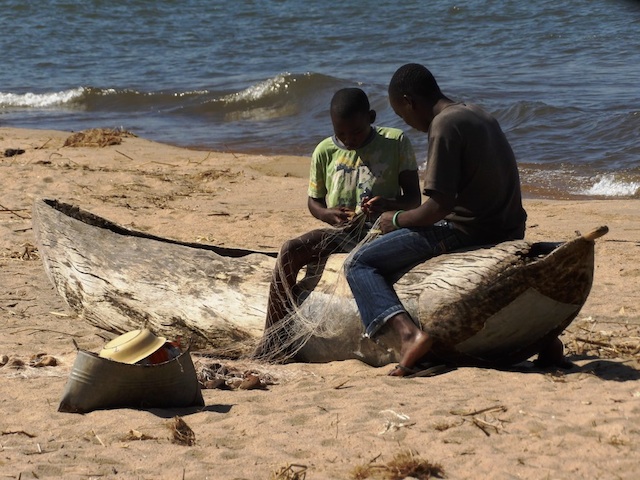 After Katenthere, we went a little further down the shore of the lake to Chiwana fishing village. This is really the poster child of the RIPPLE Africa fish conservation project and the benefit is unmistakable. In this idyllic setting, the fishermen sat around mending their nets sheltered from the midday sun under grass-covered shelters. They possessed a certain visible contentment that was enough to convince anyone that this project was working. They reported increasing fish catches and size despite using only the bigger nets (4”-5’’) and seemed keen to progress the project further. It was a truly refreshing experience, and I was even shown how to mend a net, which is a lot harder than they make it look! 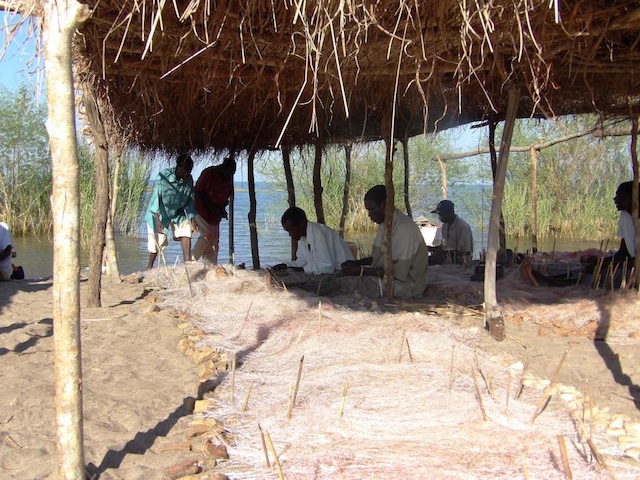 Unfortunately, on Saturday morning, we experienced first hand the ongoing damaging fish practices of some of the locals. We caught four boys fishing with mosquito nets at the beach next to ours. Despite some of the other villagers protesting, they would not stop and it was only when a few of us went across that they finally stopped fishing. One of the boys was a serial offender, and he was subsequently reported to the local village chief and will likely receive the mandatory K20,000 (£30) fine. 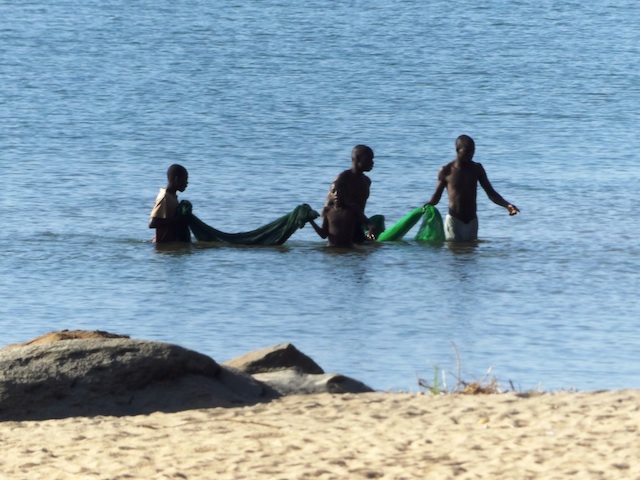 Early tomorrow morning, we are heading back to Chiwana to meet the returning fisherman with their catch, and we hope to see some impressive chambo. The future of the chambo is certainly in the balance but, from what I’ve seen, the scales are definitely tipping in their favour!!