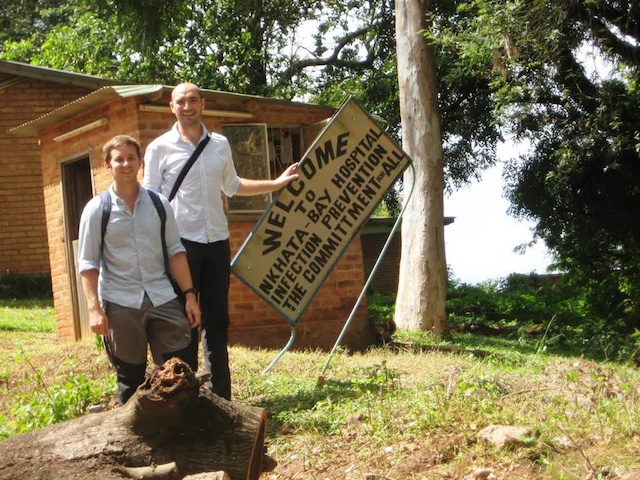 Hello from Malawi, and from the second of three healthcare volunteers currently working with RIPPLE Africa. After two years of the NHS and the fairly intense ‘foundation year’ training, I decided to take a year out to allow me to decide where I wanted my career to lead and to explore medicine in what is evidently a challenging and resource poor environment. Malawi it was!

With no idea what to expect, I was thrilled to arrive at Mwaya – a stunning lakeside retreat with the friendliest staff. Having struggled to speak even the most basic Chitonga for the first few weeks, their patience and repeated efforts to engage me have finally paid off and enable me to scrape by with an impressive four stock phrases – there is work to be done but hopefully I’m no longer being inadvertently offensive.

As Will described, there is a lot for us to be involved in out here. After our community introduction’s, we were whisked off to meet ‘King Albert’, the rather formidable ‘District Health Officer’ for the whole region and were invited/informed that we would be spending some time in the District Hospital in Nkhata Bay. At just over an hour’s drive away (depending on the state of the minibus), Nkhata Bay is a busy lakeside town that attracts its fair share of tourists due to its dive school, good hostels and transport link on the infamous ‘Ilala’ ferry. The hospital is large – equipped with a theatre, X-ray and ultrasound facilities, an outpatients department (complete with psychiatry, dentistry, dermatology, and wound dressings), a laboratory, and lots of wards. It is the central referral hub for the region, and here we would learn what we needed to be of better use in the community.

Having been keen to stay put in the community clinics, I have to admit it was a great experience. Jim was immediately taken under Albert’s almightily large wing as his ‘foot soldier’ and was whisked off on ward rounds, quizzed on anatomy and surgical procedures before being sent to theatre in a pair of oversized pink scrubs and welly boots . Despite the crushing emasculation, he was able to operate with the clinical officers, whilst collecting data to help design a new checklist to improve surgical safety. 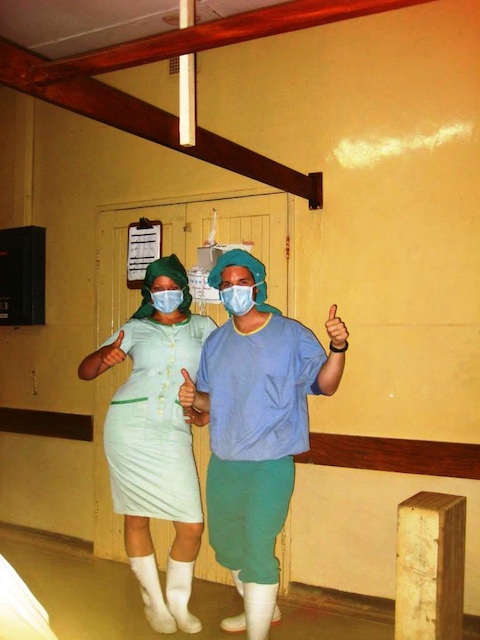 Will and I had a slightly more conspicuous start to our time (as two GP trainees of the future, we were less targeted with the torrent of questions) and instead busied ourselves in the outpatients department. The clinical officers did a good job of getting through huge numbers of patients without stress or bad temper – something I marvelled at after my own experiences of breaking into a nervous sweat after overrunning by five minutes. Everything from malaria to skin rashes, headaches, contraceptive issues, back pain, and genital ulcers came through the door, and just kept on coming. 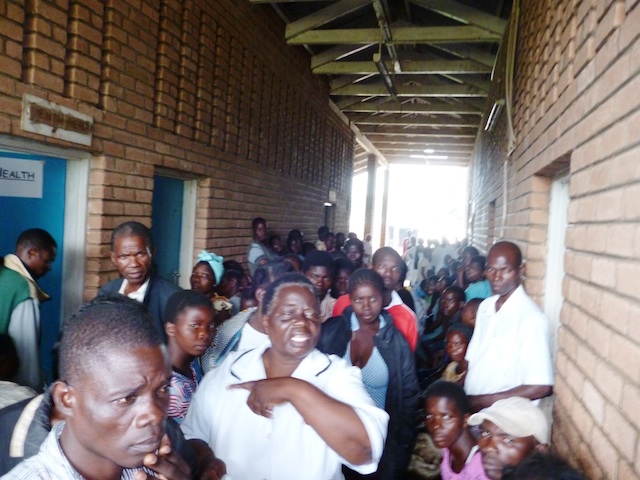 Outpatients department after the Easter weekend

The DHO was keen for us to spend some time observing the weekly diabetes and hypertension clinic – as he pointed out, overseas healthcare funding mainly focuses on HIV, malaria, TB, and malnourishment. Whilst these are undeniably large problems, there are huge numbers of people with non-commmunicable chronic conditions who go under the radar. With lack of funding comes lack of resources and education, resulting in poor management of these conditions and unnecessary deaths. I won’t bore everyone further, but the outcome of our observations will be taken back to Nkhata Bay in the form of a Powerpoint presentation, a few laminated posters to aid with patient education, and a new stamp to use in the notes in these clinics … and cake, the universal requirement for any successful meeting! It is a small contribution but, hopefully, something that can make a difference to the way these conditions are monitored and treated.

The nice thing about working with the clinical officers is that you work as a team – two minds are better than one. I enjoy being useful, and I felt useful. I learned heaps about things you’d never see in the UK, and the staff were keen to show us everything they could. There was also the huge perk of going back to stay at ‘Mayoka Village’ – highly recommended for a bit of a holiday feel! An interesting transformation from medic to vet also occurred … one dog owned by Steve and his partner (who also happen to run a great bar/restaurant) was unwell and needed antibiotics – cue lots of running around after a stressed dog with a duvet, bent needles, and narrowly avoided bites. This spectacle prompted some nearby Dutch ex-pats to enquire whether we also provided rabies vaccinations for puppies. This went only moderately better and also earned us an amazing free lunch at their lakeside home all under the watchful eye of one very angry puppy. Just your average week it seems …

So, back at Mwaya there have been several changes to our group as you’ve heard. Megan is still missed by all of us, and we’ve also just said ‘farewell’ to Anna’s dad, Tom, who set off from Kande on one of the overland trucks this weekend. Geoff is busily spending his time overseeing the ongoing RIPPLE Africa projects (Changu Changu Motos and the fishing project mainly), and we’ve been able to attend some of these meetings to explore more of what RIPPLE Africa is doing out here (more from Jim about this next Monday). Our evenings have been increasingly civilised since the arrival of Geoff – less poker playing with beans and more cheese and port evenings! We have enjoyed the company of Laura (ex-volunteer) and her boyfriend Patrick, and in their honour we spent an amazing evening on the beach with a performance from the local choir which really was incredible, and somehow descended into a Malawian style dance off. We’ve also had an evening of pizza gluttony at Ngala Beach Lodge – a fancy resort about an hour south of Mwaya complete with beach bar and infinity pool (slightly surprising out here!) 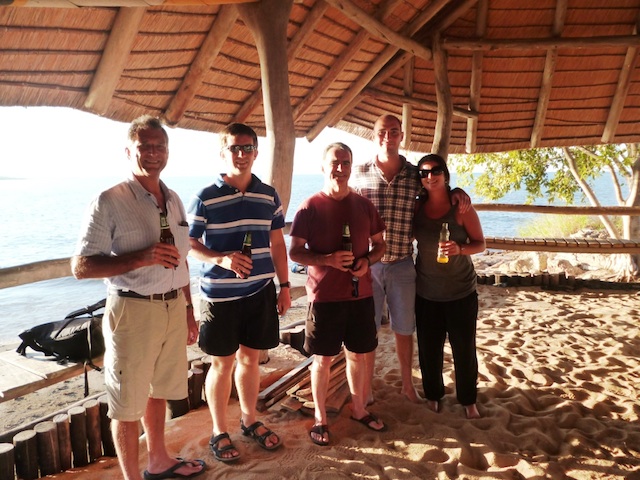 Sunset by the lake

The most exciting additions to our group are the three kittens – Chip, Buddy, and Midge. Having started with seven, there have been a few, ahem, casualties. To say I’m obsessed with them would be an understatement, and I’m currently researching ways of smuggling them home with me. There are also two other kittens who have lived in the roof space above the office, and, whilst being obscenely cute looking, they are savages who have learnt to hiss and spit. I may need to hone my cat whispering skills before I tackle the terrible two. 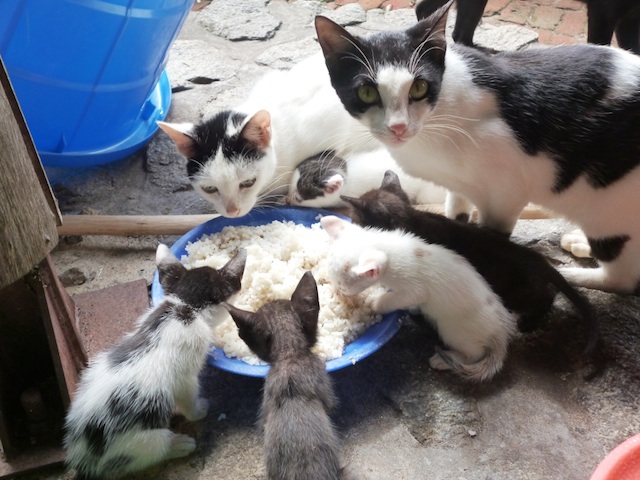 Feeding time at the zoo

Highlights of the week continue to be our daily cycling trips to and from clinic, picking up local food from the markets, ‘bottoming out’ Geoff’s 4×4 in front of a crowd of about 20 but triumphing after a filthy hour or so, being chased by children who all want to know your name and where you’re from, chasing a monitor lizard around the chalets, learning to scuba dive at Kande Island, and the sunsets/sunrises over the huge lake. 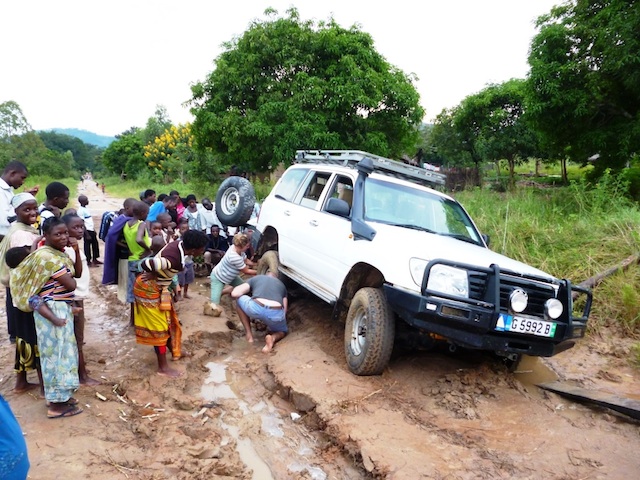 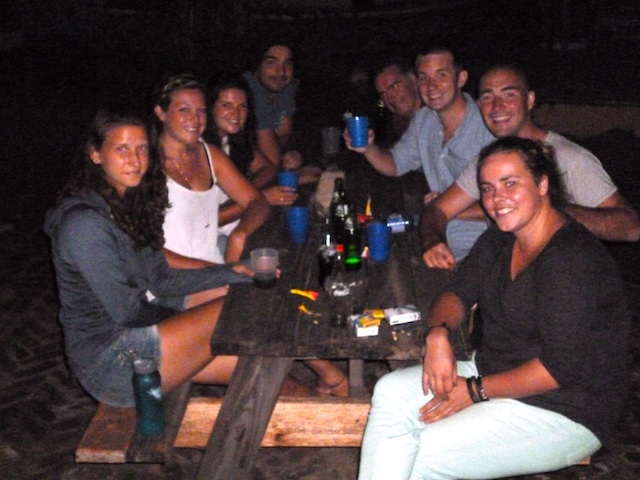 It is picture postcard beautiful here, and the Malawians are some of the warmest and most welcoming people I have come across. I will stop here as I have a tendency to write far too much and bore everyone to tears, so ‘tawonga’ from Malawi and I’ll hand over to Jim! 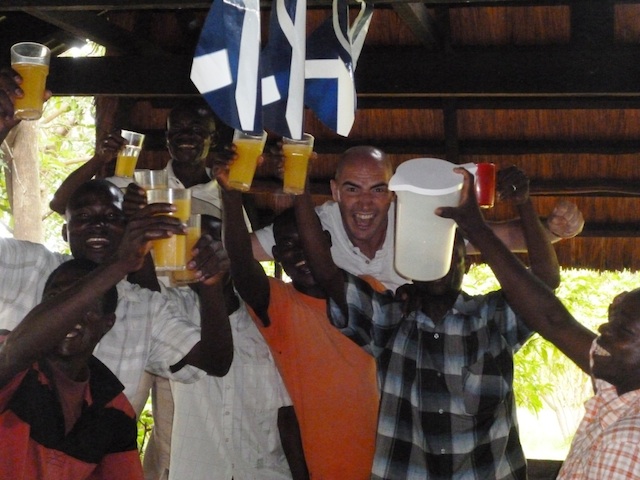 Don’t forget to come back next week and read Jim’s blog.