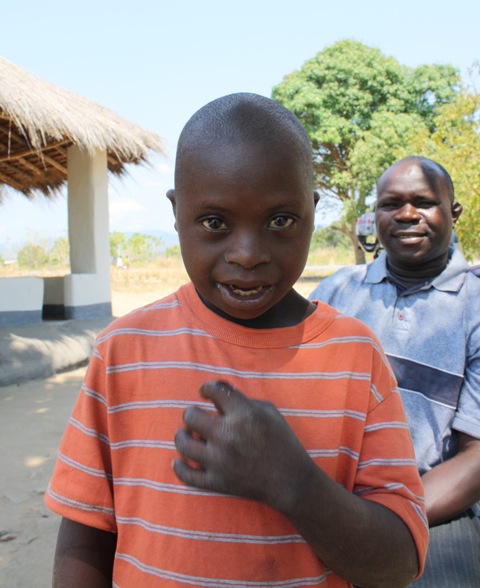 “One of the highlights for me as a healthcare volunteer is going out with Collins and getting to see some of his ‘clients’ as he called them, or patients on RIPPLE Africa’s Disabilities and Rehabilitation Project. I have been fortunate to go out with him every Thursday morning for the last three months and it has been a fantastic opportunity to get a closer look at the way in which the local community lives.

One of my favourite clients is Mamlee. He is a boy who was born with Down’s syndrome and living in Malawi it has been hard for him to get help with his learning disabilities as well as other problems that having Down’s syndrome can bring. We have therefore been trying to provide some mental stimulation for him, in order to help him learn basic concepts as well as numbers and letters.

We started by providing him with some simple ‘Snap!’ cards left by Ellie, a previous volunteer. We thought this would be a good way to help him recognise similar patterns and initially he really struggled and was unable to do it at all. However, having left the cards with him for a couple of weeks, and with the support of his mother he has massively improved and is now picking the similar cards with ease.

We have also provided Mamlee with a simple number exercise book to try to help him recognise numbers and be able to count. Progress with this has been slow, but we feel that with more repetition and more time he will be able to manage it. I am hoping to get him counting to five by the time I leave in December, so watch this space!

One of the other clients that I have had the pleasure of meeting, and some past volunteers will probably know, is Isaac. He is a young boy who has a problem with his hips and therefore has been unable to walk. I am pleased to say that with Collins’ help and some simple parallel walking bars he has now started to walk, and although he is still very unsteady and is still falling often he is improving all the time. Isaac has incredible determination for such a young boy and every time he falls he is quick to get up and try again. I think soon there will be no keeping Isaac still!

The poverty in Malawi also leads to problems with malnourishment and one such patient is a three year old boy called Brian. Malnourishment in children can often lead to stunted growth and problems with development, and you can clearly see this in Brian. He has been very slow to start walking and even when he has had food he has struggled to eat it. Collins has supported their family by helping them get supplemental feeding and by showing them how they can encourage Brian to start walking. He is now eating well and his walking has improved. He is often quite a grumpy child and never seems happy to see us. I was pleased however when last week his dislike of us caused him to run, or at least walk as quickly as he could away from us, to go and hide when he heard the sound of the motorbike approaching!

Whilst here I have also been heavily involved with Health Club and so here is an update for previous health care volunteers. Last week we made the decision to stop the Health Club as we know it and change it to more of a campaign team. It seemed that some members were not dedicated and so every week we would wait for people to turn up to practise the drama plays, but not everyone would be there, so they were never ready to take out into the community. We are now going to focus much more on going out into the community with health campaigns and make leaflets and posters, have educational talks, and question and answer sessions with the local people of Malawi. The previously dedicated members of the health club are still heavily involved with this and they are very excited about this idea, as are we because we feel we will be getting out into the community a lot more and educating people about important health issues. We have already made some great leaflets on HIV and will be doing our first campaign in one of the villages next week.

The last couple of weeks have also seen some new educational volunteers arrive at Mwaya. One is a maths teacher and one a P.E teacher from the UK. They have already started getting fully involved in lessons at Kappanda and have lots of exciting lessons planned for the weeks ahead. Anna, the P.E teacher, has also brought plenty of equipment with her ready to teach lessons including netball, volleyball and even hand ball. I am sure the students will thoroughly enjoy it and we have already had some practice volley ball sessions down at Mwaya beach with a few of the locals joining in.

The monkeys at Mwaya are always entertaining. I even had one in my chalet, although he quickly jumped out when he realised I was in there! They seem to be getting a lot bolder than they were even when I got here three months ago and sometimes will sit quite close to the kitchen and watch us all. I think it may be Geddess and Fabs’ cooking which is tempting them, but they both find it very amusing. The monkeys seem to have taken a particular dislike to poor Kendall, who has even be chased by one particularly cheeky money whilst walking to her chalet, hopefully they will get used to her by the end of her two years!

I can’t believe that three months has passed already, time at Mwaya seems to go so slowly but so fast at the same time. However in the last three months I feel I have experienced a lot and had some very interesting experiences. I am looking forward to what the next three months will bring and I am sure they will be just as interesting!”

Stay tuned next for week for the next instalment of our Mwaya Mondays blog feature!