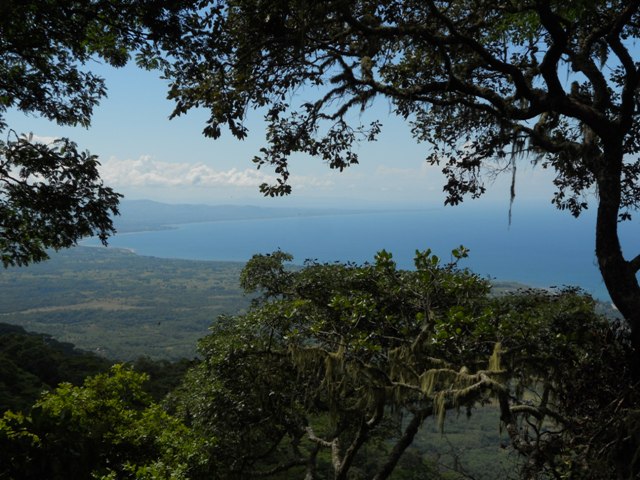 “After a long journey from Dar (including one night’s not so comfortable sleep at Mzuzu bus station!), we finally arrived on Thursday early in the morning. It was really incredible to see everyone again and their welcome more than lived up to expectations! Since arriving we have visited Kapanda Secondary School and seen the new science lab there, which was very exciting (especially the light switches!). Seeing all of Mr Mkhuta’s children, Soloman and Precious really brought me back. We have also seen many of my pupils from Kapanda who all claimed their exams had gone well, which is fantastic and those who have not yet taken their MSCE (Malawi Secondary Certificate of Education) are already turning up for tutoring. I should really film it to show my classes at home what keen really is!

Aldenham School left this morning but had a great last few days. We spent the day at Mkuzi beach on Saturday followed by singing and dancing with the choir at Lowani. They all seemed to get stuck into what they were doing and when chatting to them all, they seemed to really be enjoying their time at with RIPPLE Africa. The food has been incredible (it’s strange, while you are here you crave cheese and meat but since leaving I have really craved bean burgers!) and there are even quite a few more additions to Fabiana’s repertoire including vegetable kebabs and pumpkin burgers, which we will be trying tonight!

This morning we went off the Katenthere Pre-School where Watson and Akeem introduced us to the new little ones (INTRODUCTION!), some of whom are only one year old! Hopefully by next Monday we will have settled in more and have caught up on all the latest gossip, which I can then relay to all the readers of the Mwaya Mondays blog! Despite it being winter here in Malawi, the sun is out and the lake is blue. There is a calm breeze and all is well here at Mwaya (though Pirini lost 1-0 yesterday, we are hoping next week the scores will improve!). I can’t begin to explain how fantastic it is to be back. I only wish I never had to leave.”

“For me, the week started with a bracing stroll up Kuwirwe hill, or mountain to some of you. It’s the far left of the hills if you are looking south from Lowani. The whole school group went up and the forestry guards, Victor and McFancy, did their usual good job of safely guiding us up and down and we didn’t even get lost once. It was another excellent walk with the usual beautiful view. The school group had another busy week of activities including visiting Kapanda Secondary School for some lessons, visiting Chiomba and Mkwalakwata primary schools, more hard labour down at the tree nursery and learning how to make cassava nsima, which the lucky things got to taste! 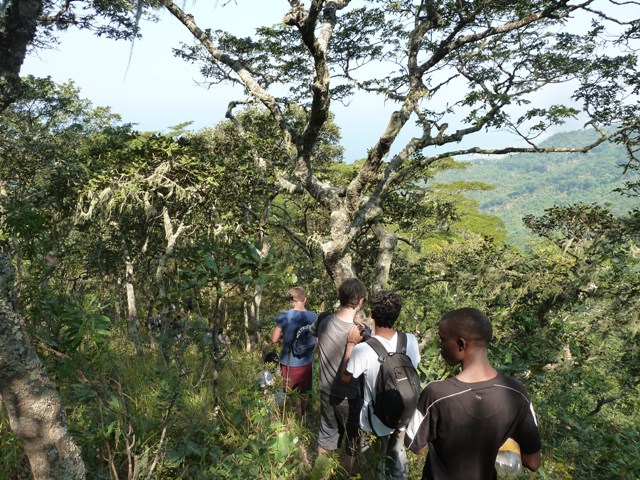 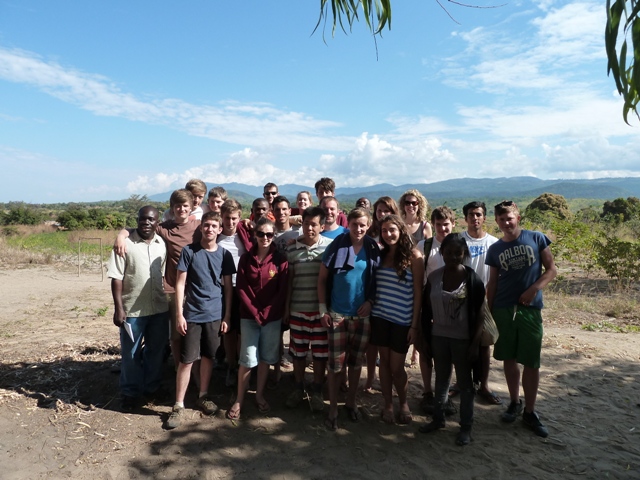 On our Changu Changu Moto project,Catherine and Andy are continuing to provide really good results for the Kitchen Performance Tests that we are conducting on the 3 Stone Fires, so that can compare the results of these tests with future tests on the Changu Changu Moto. They are conducted in peoples’ kitchens with them using their cooking fires as normal, while we weigh the daily usage of wood. The Fish Conservation Project also continues to progress. Recently RIPPLE organised a series of introductory meetings with the local chiefs and once again the response was positive with people aware of the reducing fish stocks in the lake. The next step will be to set up the Fish Conservation Committees made up of local community members who will enable the project to work on the ground at the different fish landing sites where the fishermen bring in their catches. Lastly, the new double classroom block at Mzembe Primary School continues a pace, they are now up to ring beam level on the walls, so not long untill the roof trusses start going up.

Highlights include going to Makuzi on Saturday for lunch. After a swim everyone tucked in meaty burgers or fish and chips. Then later on we had a big game of French cricket involving about 15 players down on the beach, which was great fun. It’s such a lovely spot, thanks again to Richard and Lauren for their great hospitality. And it’s great to see Chaz and Jarrod back at Mwaya Beach again, very exciting for them and everyone else who keep coming down to the beach to see them. 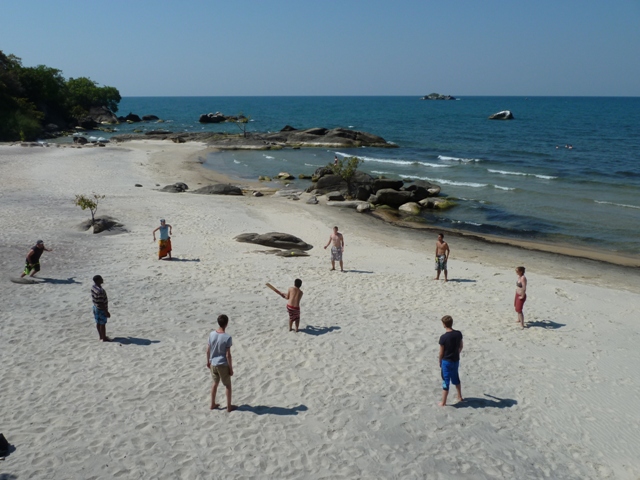 Lowlights include the leaving of Toby, Georgia and her parents. They left at abut 3am on Wednesday, so a rather early start, though someone still managed their leftover pizza at that hour in the morning before leaving. Georgia’s parents were only here a few days, but slotted straight in and were great fun, not to mention thanks for all the treats they brought. And Georgia and Toby will be greatly missed by lots of people, thanks for all the hard work and we hope you’ll be back again. Finally, the week ended in another defeat for the Aldenham football team, losing 3-1 to Force Rangers (Frank the gardener’s team, or “soldier” as some of you may know him as, a nickname gained for her prowess on the football pitch) on Sunday afternoon. Giving an unenviable record of 3 defeats in 3 games, oh dear, room for improvement I think!” 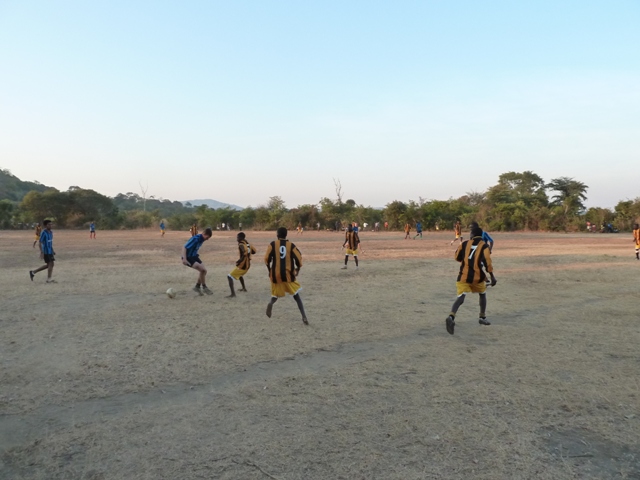 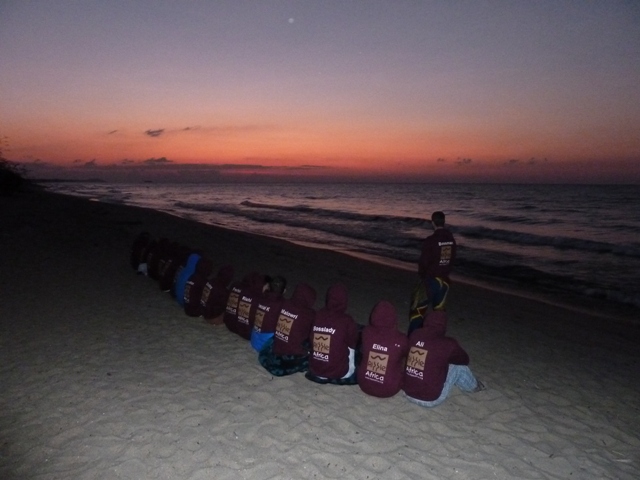