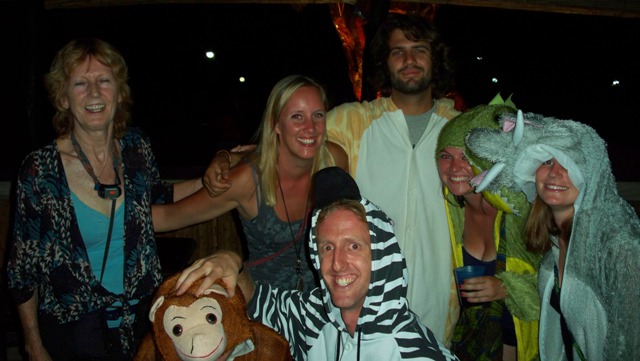 It has been a busy week at Mwaya, with a flying visit from Geoff and Liz and the arrivals of new volunteer Emily – an Australian physio; Jim and Judy Duck – visitors from Scotland; Claire and Robert Knight – Charlie’s parents; and Marilyn – Geoff’s cousin and a returning teaching volunteer.

The week started with Charlie’s birthday celebrations at Kande. We managed to get hold of enough meat for a tasty barbeque and had a safari-themed night dancing in (and on) the bar.

On Sunday afternoon, Kendall, Emily, Jim and I went to watch the football match at Mwaya pitch. I was surprised to see how many of the community members turned out to cheer on their teams – both in netball and football. They supported their teams through songs, dances and cheering and the winning netball team performed a lap of honour in celebration during half-time of the football match! The side-line entertainment was also great, with plenty of socialising and playful children.

Aside from fun and culture we have also been working hard in the pre-schools. Last Friday, Phoebe, another volunteer, and I hosted a meeting with Maurice, RIPPLE Africa’s education co-ordinator, and the head teachers from the eight RIPPLE pre-schools. In the meeting we discussed teaching strategies and the timetables being used. The teachers have agreed to trial a new time-table, incorporating small-group work into their daily teaching. Following this Phoebe and I have been visiting the pre-schools each morning to offer assistance in implementing these new ideas and guidance in specialised activities for literacy and numeracy. It is great to visit the different pre-schools, as we are able to identify areas that are working well in one school and share this with the others. For example, the way that Watson from Katenthere and Fixwell from Mazembe are using energisers to engage the children. We are preparing to hold a teacher training day at Lowani on 8th November. It is very rewarding working with both the teachers, who welcome new ideas, and the children themselves, who are very energetic.

Morning break at pre-school has become one of my favourite times of day. The children line up patiently to wash their hands and then sit seriously while they drink tea with sugar and eat sweet potatoes grown in the pre-schools’ gardens. The children often share their snacks and help each other.

The sport at Kapanda has also been a highlight for me. The new equipment that volunteer Anna brought has enabled the school to offer a wider variety of sports clubs; Anna has been running a netball club; Augustine, Kapanda’s Maths teacher, leads the football teams; and Bright, another teacher, and I have been running a volleyball club, using the pitch built by Anna, Bright and a helper called Noah, who lives nearby. The students are eager to play and improve and are preparing for a match in Chintheche next weekend.

After the sports clubs finish we are always joined by the children who live in the houses nearby. Anna, Bright and I have been playing lots of games with them, including learning to ride on the bikes (about 5 times too big for them!), piggy-back races and ball games. They even showed us their moves on the dance floor at the school disco!

All in all, life at Mwaya couldn’t be much better. The staff at RIPPLE, the Malawian people and especially the children are incredibly friendly and welcoming and the work is rewarding and worthwhile!