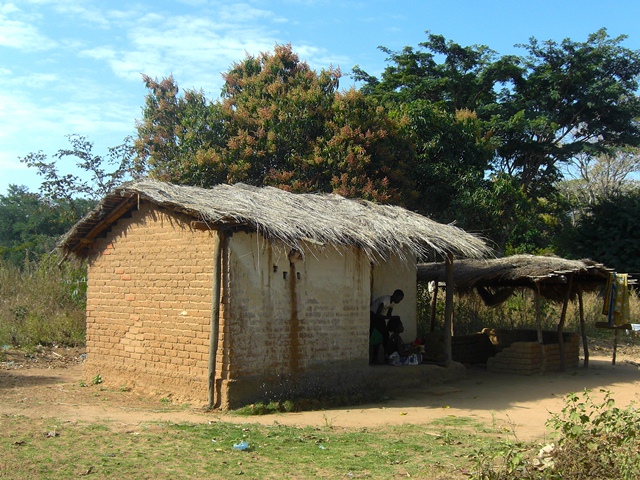 Last Tuesday, Arnold Banda, the Day Watchman of RIPPLE Africa introduced Ross and me into House Construction in Malawi. Most of the houses in rural areas are built with locally available material. Cement is very expensive and therefore rarely used by most people. Family houses only have one level, often four rooms – two bedrooms, one sitting room and one store room. Each room has a window and there are one or two doors to outside. Typical dimensions are ranging from 4 m x 6 m to 6 m x 9 m, thus an area of 24 to 54 m2. The height is about 2,5 m. Mostly the floor is of soil. In such a house, you can find a family with 6 persons.

Kitchen and washing facilities are outside the house. Water for washing, cooking and daily use will be transported either from the nearest borehole or the lake to the house in big barrels, mostly by the woman. Washing is done at rivers or the lake.

Self-made bricks are used as construction material for the houses. They are manufactured by hand close to the house. Soil with clay for the bricks can be found locally by digging sometimes deep pits.

(Clay as resource for bricks and mud)

The clay and soil is mixed with water and pressed into a wooden form for two bricks.

(Soil, Clay and Water mixture filled into a brick form)

The bricks are removed from the form and dried in the sun for at least 3 days. One person can manufacture up to 1000 bricks per day. In the next step, the bricks are fired in a stove, the vertical gaps are closed with mud and the stove will be fuelled by wood. The bricks are heated up for one day at a high temperature.

(Stove build with bricks to be dried – explained by Arnold Banda)

Then the bricks are ready for construction. There are about 6000 to 8000 bricks needed per house. The foundation consists of multiple double rows of bricks. The bricks are fixed with mud mortar consisting of clay, soil, sand and water.

(A builder working on new house)

Wooden frames are used for the doors and windows. Timber will build the superstructure of the roof. Modern houses nowadays use corrugated metal sheet. Previous houses had thatched grass roofs, which require maintenance at least once a year.

These types of houses can only be built during the dry season, from July to October. It takes about a month to build a house of this kind. Often, the bricks are manufactured in one year, than savings are made for wood and corrugated metal sheets and the house is built in the following year. It is a business of a whole family.

Also, the land is often owned by the larger family, so they live together as a larger community. With the population growth, this will be a challenge, as by sharing the land with coming generations means that the space gets smaller and smaller.

The total cost of a house is around 150,000 to 300,000 kwacha for the raw materials- or around 600 Euro- which is two times the average annual income of a typical Malawain.