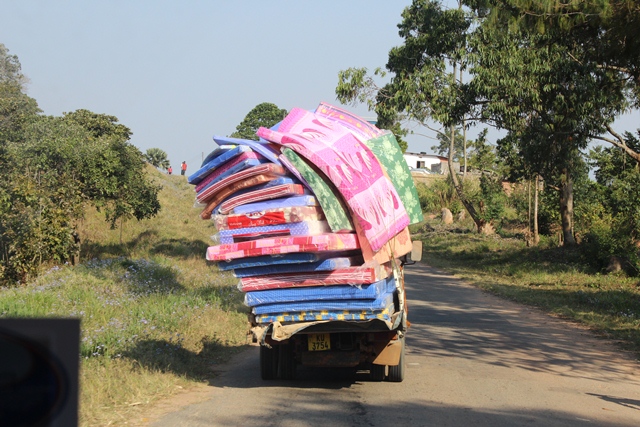 It is now getting hotter at Mwaya with the cold nights starting to heat as we are in the second half of the dry season/winter. When I first arrived back at Mwaya, in May, after being away for just over a year the place was packed, now this week the place is quietening down again with volunteers returning home and out on trips to see other parts of Africa. By Monday we will be down to five.

This week Charlie has been busy, out and about, every day doing field trips checking up on the Changu Changu Moto project across the district. I was lucky enough to join him for a trip up north to Ruarwe and Usisya. We drove up to Nkhata bay then raced the Ilala ferry to Usisya which was no easy trip taking a dirt road from Mzuzu for about one and a half hours going up and down hills all the way. Thankfully, it was not a busy road. We managed to arrive well before the ferry and met the local community volunteers and coordinators in the area. We caught the ferry up to Ruarwe and stayed at the picturesque lodge of Zulukhuni River Lodge, Charlie, Force and the local coordinator and CV’s went out trekking through the villages doing spot checks to ensure maintenance of the stoves and that the coordinators and CVs were motivated and doing their jobs. The next morning we got the ferry back to Usisya and the same checks were repeated with the day spent checking on the stoves in that area. There was a small incident with a snake climbing up into the engine of Tom (Geoff’s car), eventually the car was driven back to the lodge presuming the snake to be dead only to see the snake reappear a few hours later when the car was driven somewhere else. They definitely got it the second time and Force has the pictures to prove it. That night we were lucky enough to have a malipenga (traditional dancing done by men with drums) competition outside our lodge. The drums and singing were certainly a site not to be missed. As usual the children were just as joyful and excitable.

Back at Mwaya and I must reflect on the way things have both changed and stayed the same from last year. Healthcare being my thing as a nurse is what I focus on, Mwaya Dispensary is functioning very well, and they all work really well as a team down there. I am forever impressed with the effort that Caroline and Theresa put in down there, they complete their set tasks including dispensing, recording, dressings and cleaning to such a high level and with such competence. Solomocha (the medical assistant at Mwaya) has moved into his house recently finished by RIPPLE Africa. Janet is her usual presence at Kachere Clinic and still a favourite with many health volunteers that come out here. Fletcher is still running under five clinics, and this time round I have noticed more how much the women at the clinic respect him and listen to what he has to say. He has a full week of work but yet finds time to greet and chat to everyone and in that way gains an understanding greater than anyone else’s about the status of health in this area. It is one of my favourite things to go out into the community to see a patient with him who won’t go to hospital but always end up agreeing with Fletcher and going the next day. Chintheche hospital although understaffed is running well due to the low malaria season and the drastic reduction in patients. I couldn’t believe it when I went up there a couple of weeks after arriving back to find the wards half full when every week I went up there last year they were overflowing. It is getting quieter still.

Recently there have been a few volunteers running a holiday school for a few of the kids and this has been a great success by every account. The learners spent the morning with a volunteer or two and then would head home around 11. A new classroom block is shooting up, fingers crossed it will be ready for the fast approaching return of school. The new Chintheche office has also been completed with only a bit of landscaping to go, the move was made this Monday the 19th and everyone is now settling in to the new office.

More buildings are going up, there are a few new staff at Mwaya but the atmosphere here is the same and arriving back after such an amazing 6 months last year it really feels like coming home.