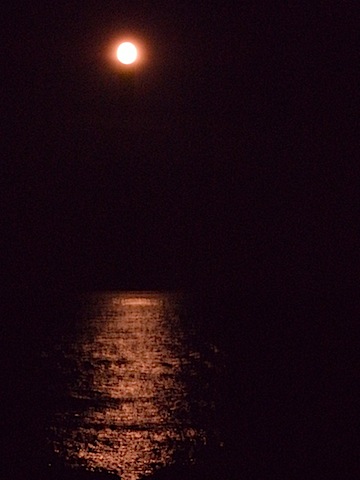 Cheers from Mwaya! After a very brief visit in 2012, I have returned to RIPPLE Africa to teach a three- week session of “summer” school for the standards 7 and 8 learners at Mwaya Primary. While this is Malawian winter, the beautiful sunny weather seems like summer to someone from north eastern America. Mwaya Beach has been very busy with volunteers coming and going, and visitors from Philadelphia, Germany and the Institute of Physics. After convincing the Germans that the Americans did really land on the moon and that we do not scan everyone’s emails, we have enjoyed many laughs and fine meals. The red moon was particularly beautiful.

Holiday school at Mwaya Primary school has been a big hit with the Malawian learners. Not knowing what to expect, I arrived the first morning after the Bank Holiday to find 30 learners waiting for us at Mwaya Primary. Thank you so much to Maurice for setting this up. With help from Ross and Ellie, we have been studying maths and English, getting some much-needed exercise, and enjoying hands on projects and arts and crafts. We have struggled a little bit with the language barrier, but Casava Mike and Winnie Msiska have been tremendously helpful in communicating with the learners. Each day begins with a math lesson at 8:00. We have been focussing on decimals, fractions, and other basic computational skills in two groups based on ability level. The learners have made great progress and show genuine enthusiasm for learning maths. They appreciate the individual attentions and extra practice at a slower pace than their standard curriculum. I am leaving 25 copies of a Standard 8 math workbook with Mr Longwe in the library for learners to continue using, and for other RIPPLE volunteers to use in the future.

Math lessons are followed each day by enthusiastic soccer and netball. Last Thursday, we challenged the nearby village to a friendly in each sport, with a 1-1 tie in soccer and a last minute one-point victory in netball. We had challenged them to a rematch the next week, but they failed to show up at the appointed time. I guess they were scared.

After sport each day, we have been reading excerpts from my friend William Kamkwamba’s book, The Boy Who Harnessed the Wind. I brought 25 copies of the book with me, and they will remain in the library for others to read. If you have not yet read this inspirational story, I highly recommend it. Reading William’s book has provided relevant material for discussions with the learners. We had hoped to inspire their imagination, creativity and ingenuity. First, however, we had to explain to them what a windmill is. By making some origami pinwheels we were able to demonstrate the mechanism of a windmill. A hand-cranked torch demonstrated small-scale electrical generation from a spinning dynamo. With the help of Kristine and Ingot from Institute of Physics, we were able to demonstrate magnetic forces of attraction and repulsion and depict lines of force with some black sand (containing iron) from the beach. They also had a model windmill, which the learners were able to blow on and watch a needle on the voltmeter swing to show the generation of electricity. We hope to have William Kamkwamba, himself, speak to the children on Monday morning when he returns to take me to the airport. We have been very fortunate to have these guests at this time, and the lessons have evolved into a cohesive interdisciplinary unit that engages the students in a relevant way. The energy and zeal they display in response to the readings and projects seems to indicate we have captured their imagination. We can only hope that some of them will be inspired to take initiative in solving problems in their everyday world.

In writing class, students began by writing directions for making peanut butter and nsima. They then wrote directions to each of their houses. Last weekend, Ross, Marije, Ellie and I, with guidance from Mike, visited many of the children’s homes to meet their families and learn more about their lives. I hope to have a compilation video on YouTube early next month. (We will include the link in a future blog.) The final assignment was to write pen pal letters to my student back home in America. I had brought with me 15 letters from students at Thetford Academy in Vermont, which helped depict life in America. I am particularly pleased with the time and effort the Malawian learners put in to writing their responses. Despite the language barrier, their replies give a detailed description of life in Malawi from the eyes of a young child. They even included various maps, pictures and the Malawian flag. I hope to have a new batch of letters delivered to RIPPLE sometime in the fall.

We end each day with arts and crafts. These sessions have been perhaps the most rewarding part of holiday school. The learners are so excited to do hands on projects. Ross and Ellie taught some origami, including a paper “pig foot” toy, paper cup, the pinwheels and paper aeroplanes. I had brought some beading supplies and bright coloured cord for necklaces and friendship bracelets. Moments of absolute chaos evolved into productive sessions of creativity and craftsmanship as they mastered each new challenge. The learners wore their necklaces and bracelets proudly all month. They roared with laughter and delight in their eyes as they blew on the pinwheels and watched them spin. The uniquely Malawian sounds of “Ooohhhh” and “ Eeeeeeeee!” have rejuvenated my love of teaching.

We have had some fun adventures as well these past two weeks. Several of the volunteers joined the Aldenham kids and their teachers on a hike up Mt. Kuwirwi. The hike was challenging, but the view was amazing. We all felt the climb in our legs for several days afterwards. We also travelled to Mkuzi Beach for some fun in the sun and a very nice lunch of beef burgers and chicken wraps. We said farewell to the Aldenham chaps in fine fashion with good food, moderate drink (at least most were moderate), and fine food. I even left the last of the Cauliflower and Cheese for Charlie. I cannot believe my time here at RIPPLE is coming to an end. I do hope the holiday school session will become an annual event, and I highly recommend a month of teaching in Malawi to any teachers back home who want a new perspective on their career and on life in general.