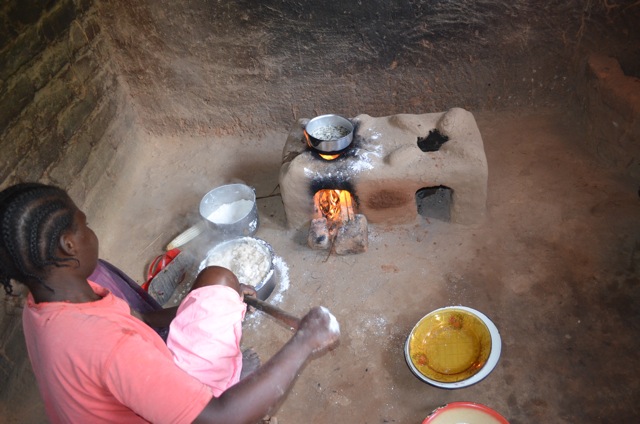 The week started with a Changu Changu Moto field trip on Monday with Catherine, Geoff, Susie, Harry (volunteer) and I in the south of the district near Tukombo. Recently Geoff and I have been doing lots of work for the stove project to think more about the education and training of the households. So we wanted to try out some of our training material and see how the Community Volunteers and householders responded. This trip really made us realise how the householders need to take more ownership of the stoves and look after them themselves rather than waiting for the Community Volunteer to fix and maintain them. It also made us realise that the householders have the skills, but they need to be shown and nudged in the right direction to do it. It was of particular interest to volunteer Harry who hasn’t seen many Changu Changu Motos to date, but he has been doing a lot of hard work on a database for the project, so it was useful for him to see how things were working on the ground. As ever it was a really interesting and useful trip speaking to people, it just takes education and patience.

The very exciting news from Katentere is that the construction of the pre-school is under way. The site was very quickly cleared in preparation for the builders, who have started preparing the foundations. Watson, Akim and the local community are very pleased and grateful to all who have made this possible. Furthermore, on the building front the carpenters have installed several clear plastic panels to some of the classrooms at Kapanda Secondary School. They have been fitted in place of existing metal roof sheets to make the rooms a lot lighter, which will be a huge benefit to the students. We started with a few to see what they are like, but the difference is amazing, so we shall hopefully be getting some more for the other classrooms. Thanks again for the kind donations towards these from previous volunteer Joan Hoggan, and also the Thomas Mills High School who have been long-term supporters of Kapanda.

We’ve had a few more arrivals this week. Laura Derkson, an ex-volunteer, returning for her fifth visit, stayed with us for a week before heading to Lilongwe to do research for her PhD. Some of the girls here were particularly pleased with the Yoga classes she conducted; we’ll see how long they continue now that she’s gone! And current volunteers, Frankie and Charlie, returned from their two weeks travelling. They saw lots of exciting beasts including leopards in South Luangwa, though sadly no honey badger. Then they went to Likoma on the Ilala, which was working again having been out of service for about a year. Though unfortunately they had to get a local boat back that wasn’t quite as comfy as the Ilala, but they survived to return to Mwaya where they were warmly welcomed with a cold Kuche Kuche beer.

Lastly the week ended in celebration, with volunteers Rose and Morgan having their birthdays. So on Saturday afternoon we went to Ngala Lodge further down the lakeshore. The festivities started with raft building competition before rather slowly going round a buoy out in the lake. It was the tightest of finishes, so I couldn’t possibly say who won, but discussions went on well into the night into who was victorious, though one raft did look considerably better than the other by the end of the race! This was followed up by a wonderful choir down on the beach, which was thoroughly enjoyed by all the guests staying at the lodge. Then of course the main event of many deliciously cheesy pizzas, not to mention a few birthday cakes afterwards. A very merry evening was had by all.