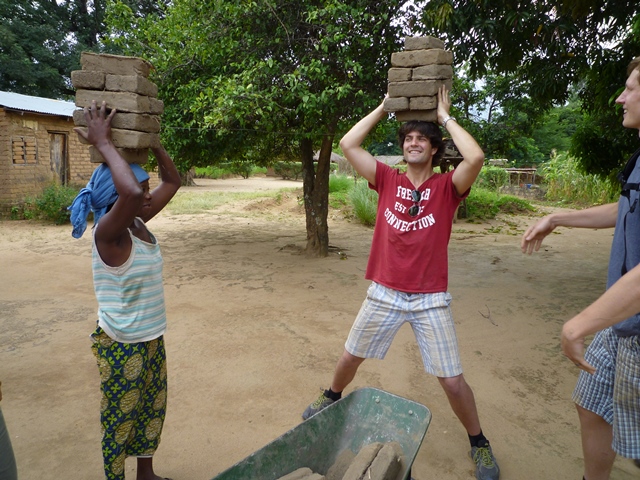 Last week, Morgan, Mark, Triona, Harry and I met up with Catherine – RIPPLE’s environmental projects manager – to trundle a wheelbarrow of sundried clay bricks to the khonde of a local chief. Our remit was to construct one of RIPPLE Africa’s fuel-efficient “Changu Changu Moto” stoves for him.

Between the three men in our party, we heaved the overladen barrow for about a mile to the chief’s stately homestead, arriving exhausted and dripping with sweat. The bricks were exceedingly heavy, and upon arrival we felt quite charitable for having helped Catherine – a small-framed Malawian woman of about five feet in height. We were grateful to have been there for her and asked how she would have transported the load had it not been for us:

“Oh, I’d have just taken it by myself. That’s what I usually do.”

We were crushed and emasculated: broken both spiritually and physically from the strenuous exertion.
“If I’m only taking ten bricks, I’ll usually just carry them on my head,” was the final coup de grace.
We looked her up and down. The bricks must have been almost as heavy as she.

“As can I,” I declared. Like a mad T.E. Lawrence going truly native, I too would prove my worth to the locals.
We began loading the bricks.

I squatted, as vertically as I could, whilst Mark started placing bricks upon my skull. Catherine accepted the challenge, wrapping a brightly hued chitenje shawl around her head in readiness.

The technique was to place one brick sideways over the cranial ridge, with the remaining nine crisscrossed atop it. Even with the substantial padding offered by my mop of hair, it was extremely painful and most precariously balanced.
My rival in this competition, the petite Catherine, was quickly five bricks ahead and appeared wholly comfortable with the operation: a wry smile came over her when, at last, we were both fully laden with ten large clay bricks apiece.
It was excruciating, and perhaps the greatest skill required was balance; I did not attempt movement for fear of losing the entire pile. Meanwhile, Catherine was showboating, holding the entire stack with one hand, and sometimes with neither.

To maintain at least a soupcon of my dwindling masculinity, I unsportingly blamed the landslide defeat on my lack of a head shawl. Then, we moved on and set to the task of erecting the chief’s mud stove.

Construction began with a foundation of nine bricks, which formed two fire pits. Using the same mortar-mix as is used for the bricks (a slurry of water and clay-rich soil dug straight from the ground), a second layer of bricks was added, and finally a third until there was an oblong, with two fire pits, covered from all but one side, with space on top for a pair of large saucepans.

The stoves are always built so that their fronts face kitchen, this allows for a through-draft, and encourages the smoke to billow away from the cook and the de rigueur papoosed child. Assembly lasted about forty-five minutes, and necessitated some 26 of our non-kiln baked bricks – these being made previously and taking an hour to form and several more to dry.

Depending on the loam, a finished stove might be ready for use after between one and two days.
The stoves require two thirds the amount firewood compared to a traditional three stone fire. And their fuel-efficiency also permits the Malawians to burn smaller pieces of wood, such as the many scraps of old timber that, hitherto, had been unusable.

The smoke is greatly lessened, and the outer body of the stove remains relatively cool, vastly lessening the risk of serious burn injuries.

After a render was applied, our stove was complete. We stood and regarded the thing proudly – the men (Mark, Harry and I) had transported the aforementioned substantiality of bricks; the women in our number (Triona and Morgan) had been solely responsible for the manufacture of the stove, save for our masculine attempts to advise on the consistency of the mortar (which largely went unheeded), or the twenty minutes toward the end during which we found a new use for the wheelbarrow, speedily trundling a cargo of boisterous children around the village.

We bid farewell to Catherine, and trooped back through the long grass, and amongst abundant bougainvillea, ripening banana plants, and by the tall, plentiful trees with their wide boughs and fragrant ice-white blossom, all the time checking the ground immediately before us for mambas.

Arriving at the camp at midday, we prepared a hearty lunch of rice and vegetables. Post-prandium, we took to the ledge that overlooks the Lake to bask in the generous, white sun that is so uniquely African. A high wind threw tall waves over the black boulders along the littoral; the mango trees shook breezily overhead; and, with Pink Gin and Tonic in one hand, a copy of Green Hills of Africa in the other, life was spectacular and blissful.