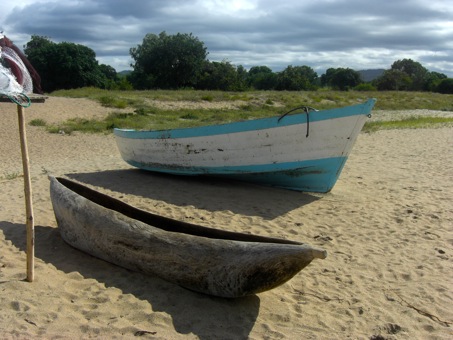 “In this week’s blog I would like to share some experiences and thoughts with you which I have had during my first three weeks here at Mwaya in Malawi.

Having read about Africa and Malawi in particular before my trip, I had learned many statistics pertaining to the country’s economy, healthcare system, and population. However nothing prepared me for such positive impressions of my first experience! Malawi is a friendly peaceful country with nice people, mostly very friendly and always ready to help each other and visitors. Further, the landscape and nature is gorgeous.

At Mwaya Beach, the food is just great and very healthy (if you eat a reasonable portion). The chefs do a great job with all sorts of vegetables and fruit. We even had some fresh fish from the lake. By the way, one discovers in the early morning, if there will be fish in the afternoon. If the fisherman have been out in the night with their tiny canoes and some larger boats, their coming back is a celebration. The drums are played and fishermen sing on the beach; this starts around 4:30 in the morning. Unfortunately, it seems to be very dangerous to go fishing. Last week we learned that three fisherman drowned in the rough lake.

I have also learned in the last weeks that gin and tonic must give you some additional protection against Malaria, at least the English volunteers seem to believe in it. Being the only foreigner in the group of English volunteers (maybe counting the Irish nurse couple Trina and Mark as non English) it is sometimes difficult to follow their precise English and for them to understand my more global mix of English without correct pronunciation. But it is a great team and it is very interesting to listen to their experiences and opinions and exchange thoughts, specifically with my chalet-mate Mike.

I have been really impressed by the healthcare volunteers staying at Mwaya and can confirm first hand that the medical care they provide is great. Unfortunately I got an infection in my eye, combined with a high sensitivity to light (they called it snow blindness). I talked to Frankie and Charlie 2, the two doctors currently here for four months. They immediately cared for me, inspected my eye, found no particles in it, however a small wound in the upper lid. They flushed out my eye, went to the dispensary and got proper eye ointment for me. I have been applying this since a couple of days, combined with wearing double sunglasses and it has been a great relief. Many thanks to the healthcare team! Unfortunately the infection had stopped me from doing the early morning swim with Charlie 1. It is just great, and I hope to go back to the lake next week.

Talking about healthcare, you may have read about some of the activities of the RIPPLE Africa healthcare volunteers in previous blogs. In my second week, I had the privilege to attend the premiere of the Healthcare play, which Collins (RIPPLE Africa’s healthcare manager), Mark, Trina, Frankie and Charlie 2 established with the members of the Health Club. They presented it as part of the community assembly in Mazembe. The play was just great! Around 130 people from the community attended and had a lot of fun. The village headman, together with Collins at the end of the various plays, supported and emphasized the messages given in the play, such as the prevention of diseases such as Cholera and HIV/AIDs, and encouraged good practices of family planning, discussed abortion and the use of traditional medicine, and more. It was interesting for me, having been raised in a conservative community, to see how open these vital issues are addressed and attended. (I had the same experience during a Monday morning briefing of the pupils at one of the primary schools). Besides the play, it was also interesting to watch the village assembly, how the chief and some elder members briefed the community and how everyone raised their hands, made comments and statements and also donated money ad hoc for a coffin.

So what is my part for the time being? After having been taken around the various projects in healthcare, the environment and education projects to see where I could be of service, I chose to support teaching English and Maths at Standard 6 in Mwaya Primary School. It is really an experience. The class I am assisting has around 115 learners at an age between 12 and 15, all in a pretty small room with limited light in the morning. Without being a teacher but having experience working with larger groups of people, I feel I can make a contribution as a second teacher in the class. I can go around maintaining the attention, help marking the exercises, take a part in the lessons and offer review classes in the afternoon. Davie, the young and keen class teacher and Math teacher of this class, and Mr. Harvey Zulu, the Deputy Head Master and English Teacher of the class, and I build a good team with the target of helping the class to acquire enough knowledge to be ready for Standard 7 in September 2013. On one night there was a heavy thunderstorm with heavy rain. On the next morning there were only about half of the pupils in school – what a relief that was! It was much easier to teach, to keep their attention during the lesson and also to help them individually during exercise – and this with 49 kids in the classroom.

All in all, I am enjoying the stay here with RIPPLE Africa very much and look forward to discovering further opportunities to bring in my time and skills together with my colleagues to make at least a small positive and lasting contribution to the community in Nkhata Bay District.

It may be a bit early, but after three weeks I am optimistic that with the open minds of the Malawians and support from outside the country, it will be possible to mitigate the challenges over time.