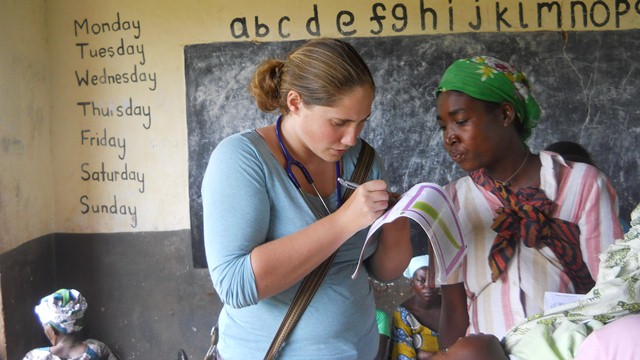 After a short break in reporting Mwaya news over Easter, we’re happy to return with this week’s blog by RIPPLE volunteer Charlie:

“This week began slowly again due to the Easter bank holiday Monday. Charlie arrived back refreshed from his holiday in Monkey Bay, and made a point of telling us of how he had befriended his French hotel owners and was invited to dinner including newly imported French cheeses! Needless to say we were very envious, and were dreaming of creamy gooey camembert that night, but Charlie works very hard and so his R&R was well deserved.

Seeing as the health centres were closed on Monday we took a bash at sorting and organising the box of medical supplies that has been left at Mwaya by previous volunteers. As well as some items of questionable value or use in the rural setting, there were lots of dressings and some sterile dressing kits and suture kits which were perfect, and so after ok’ing it with Dan and Morton we divided them up and delivered them to the local health centres. It seemed a waste to ignore supplies that were already here, and the clinics were very appreciative! It was back to business as usual on Tuesday and this week we have continued to attend the local health centres to observe and assist in various clinics. Once again Frankie attended one of the Under Five Clinics and assisted with the weighing and measuring as well as jabbing a few more babies and causing more distraught wails (it’s for your own good really!). I witnessed one of the family planning clinics in action this week. The nurse at Kande Health Centre had just arrived back from a week-long course on how to insert the contraceptive implant (which is injected under the skin of the upper arm) and it was gratifying to see an immediate high uptake with eight women choosing to undergo the procedure. I don’t think he was quite expecting such an influx and the clinic went on quite a while!

This week has seen another round of successful health clubs, and our productions are starting to look quite polished. I now have my role as unsuspecting mzungu down pat in our short comedy sketch about the importance of food hygiene and adult education, and the longer piece on the dangers of unprotected sex and illegal abortions is coming along now. Although it’s quite difficult to organise everybody (the cast for the second play now stands at nine), Collins is doing an excellent job, and encouraging everybody with stories of other educational theatre groups which have gone on to be very successful. Frankie and I have also continued to run teaching sessions to some of the local secondary school students who have come to us asking for tutoring. I have been teaching biology to two of the Form 3 students and have been covering topics from plant biology to the digestive system to genetics and evolution- I must admit that while my knowledge of the latter two is still pretty good, my memories of photosynthesis and geotropism from GCSE were a little shaky to start off with, but soon came flooding back! Frankie has two tutor groups running at the moment, one teaching basic computer skills to Maurice (education co-ordinator at Mwaya Primary School) as well one of the local secondary school students. The other is private tutoring for Moses, a very sharp Form 4 student who has aspirations of becoming a doctor (does he know what he’s letting himself in for?!). He initially came to Frankie asking to be taught about “all the diseases” and for her part Frankie has been making inroads into that rather massive amount of material starting off with sessions on heart attacks, gallstones and malaria.

The weather has turned a bit cooler and sadly we have had no more red moonrises, but to make up for that we have been treated to another spectacular bout of nocturnal pyrotechnics in the form of a whopping thunder storm on Tuesday night which had the chalets shaking on several occasions due to the proximity of the lightning strikes (we reckon the closest was about a mile away!). The cool weather did prove to be quite a relief however, as on Friday we made a long and ‘cosy’ matola trip to Mzuzu to negotiate the bafflingly repetitive phenomenon which is Malawian bureaucracy. Having managed to extend our visas, several multiply stamped quadruplicate forms later, we were rewarded with a top notch curry in the A1 restaurant, Mzuzu’s finest (and likely only) Indian pizza restaurant, and then went to buy some veg at the green shop and met the very friendly owner Bobby. After another matola trip, this one even less comfortable but thankfully quicker, we arrived back at Mwaya Beach which is really starting to feel like home. In the evening we welcomed Mark and Triona, two new health volunteers who are nurses from Ireland. Luckily their trip from Lilongwe was not quite as eventful as our own- the second bus of our journey is still sitting at the road block a month after just getting us here before breaking down. Friendly perhaps, punctual and reliable is another matter! We also welcomed a delegation of forty Malawian journalists, who are staying at Lowani for a conference over the weekend. In true Malawian style, having aimed to arrive at midday, they arrived at half past eight in the evening and at half past nine it transpired that none of them knew how to put up a tent- we had a very fun impromptu team-building exercise, and successfully erected all twelve tents in only an hour and a half!

Finally, as has become customary over the last couple of weeks I’ll continue the ‘nature notes’ section of the blog; this week we discovered the weaver bird- a rather beautiful little yellow bird which makes its nests dangling from the top of the reeds in the marshy area next to the track down from Matete roadblock. We have also had some unconfirmed reports of other local wildlife coming down to the water’s edge for refreshment in the evening…”