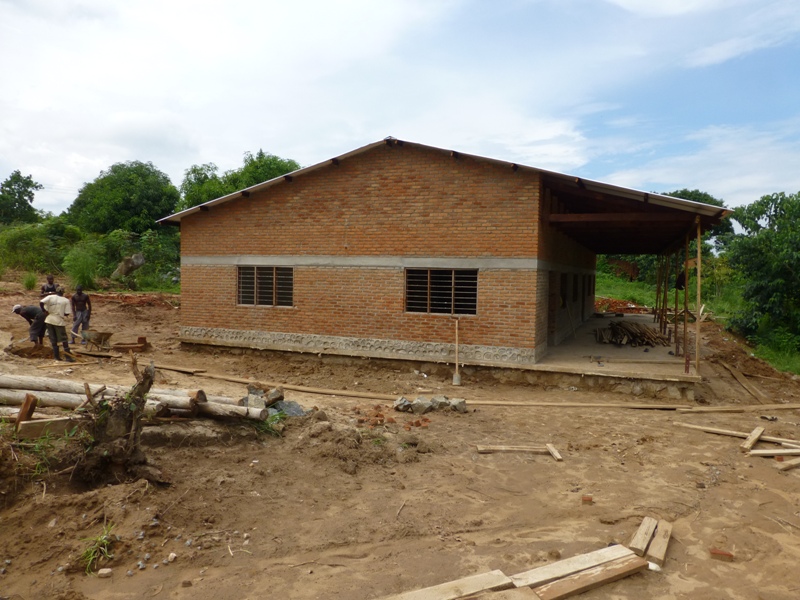 “Welcome back to Mwaya Mondays after the festive break. I hope you had a suitably enjoyable Christmas and a very happy new year! A lot has been happening whilst we’ve been away.

We’ve been working hard on some important building projects, including two teachers’ houses, a medical assistant’s house, and a new RIPPLE Africa office in Chintheche. So far, foundations are complete on the two teachers’ houses at Kapanda and the medical assistant’s house at Mwaya Dispensary. The brick work is up to door and window frame level, which they have now started fitting. Furthermore, the new environmental office at Chintheche is structurally finished. The builders are landscaping and the carpenters, painters, electricians and plumbers are putting the finishing touches to the building, which should be finished in the next month or two.

It’s important to note that none of this would be possible with some really important donations. One teacher’s house has been kindly paid for by
Independents United, a marketing company in London who has chosen to donate the extra profit they made last year to charity! The second teacher’s house has been paid for thanks to Francesca Bianchi from Malta, whose fundraising efforts at a fashion show in May 2012 combined with the joint effort of the Malta March to Malawi group of women who had been raising money for us all summer, have resulted in a teacher’s house being built! Lastly, the medical assistant’s house has been paid for by ETWA, in an application put forward by previous volunteer Frank de Jong. It’s wonderful to see the impact that these kinds of donations can have in Malawi, particularly with building projects where we can physically watch the money being put to good use! Thanks you everyone!

At Kapanda the newly formed “wildlife club” will be taking over the gardens there to use it for practical lessons in conjunction with Agriculture and Biology classes, as well as looking after the bee hives that are currently being hung. All Physical Science, Biology and Agriculture lessons are now being taught in the Physics Lab from the start of this term. Dan, Assistant Manager at Mwaya, has been overseeing tree seedling planting at Mwaya Primary School, Chiomba Primary School and Bandawe School for the Deaf. Each school grew 1000 senna siamea trees from seeds, as well as receiving some guava, pawpaw, citrus, jacaranda and flamboyant tree seedlings. January and February are the months for planting out, as it’s the start of the rainy season. So far, we’ve had a fair amount of rain, more than we’d had at this point last year according to people in the local community. So hopefully we’ll get more rain than last year, when Malawi didn’t really get enough. Thankfully everywhere is looking lovely and green again and the water level in the lake is rising.

On the environmental front: last month another hill forest area was officially signed up for conservation, that of Razel Hill. So there was a signing ceremony up in the hills with lots of members of the local community, as well as the district officials to sign the documents. And of course the obligatory singing and dancing that accompanies such ceremonies. All this despite the heavy rains, where ‘Tom’ the RIPPLE vehicle had to go and collect the district officials from half way up the hill as their vehicle couldn’t cross an ever rising stream! The Changu Changu Moto stove project continues to progress. The information about all the households and stoves in the district has been a real challenge, but we’re getting there. The next big push will be the continued return visits to ensure people are using the stoves, maintaining them and using the correct amount of wood. The Fish Conservation Project is now being implemented. It has been officially signed at district level to approve the new local bylaws to restrict fishing to conserve fish for the future. The Fish Conservation Committees have been formed at each beach landing site, made up of members of the local community. There have been training meeting so that these committee members fully understand the project, its importance to the community and how they will implement.

It’s been very quiet on the volunteer front. Nick was the first one to arrive on the 30th, he’s doing some interesting research for his MSc into the benefits of volunteering. Hope he finds some! Last week a returning volunteering arrived, Lisbeth, with her husband Hendrick, so it was lovely to see them back at Mwaya. Alice and Charlotte arrived on Thursday for a few days to find out more about RIPPLE Africa. Alice is running a creative environmental workshop focusing on deforestation in Malawi through REDD Horizon which is an organisation affiliate with Edinburgh University. And then on Saturday Abby and Peter arrived, our first real volunteers of 2013, who are both going to be helping out at various local schools. In other exciting news, the showers have been re-painted. Malawi gin and bottles of tonic were available in Peoples Supermarket again in Chintheche for the first time in about eight months. And a hippo was found in Mazembe River, sadly not a live one though!

We look forward to giving you more news in the weeks to come as we get back into the Mwaya Monday routine over our break during Christmas and January, however we’re glad that so much has happened to write about in this catch-up blog.”