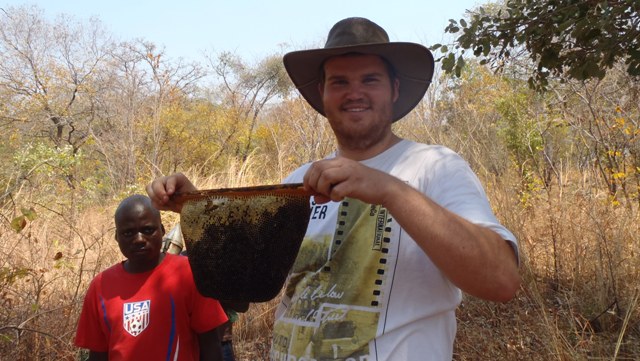 “We had an exciting start this week at Mwaya. After settling in to eat another delicious dinner on the deck, it came to our attention that there was a large fire not far from Mwaya, and very close to Lowani (another lodge owned by RIPPLE). Fires are a regular occurrence here in Malawi, as many people burn their field to get rid of weeds and make their fields ‘neat’. However, this fire was much larger than regular. It did not take long for Charlie, Jess and Matt, along with three of the night watchman, to rush over to see if they could help. Arnold took the lead, breaking a branch off a nearby tree and using it to smother the flames. The others followed with great success. Other staff and villagers also arrived to help and in less than an hour the fire was extinguished. It was great to see Malawians, Australians and an Englishman all working together. Covered in ash the heroes returned to Mwaya to enjoy a few well-earned beers.

Jess and Matt enjoyed a visit to some nearby beekeepers. After introductions, they were taken to see the bee hives and were allowed to gorge themselves on delicious fresh honey. Jess and Matt are keen to help expand beekeeping in the area. At the moment, there is not much honey made in the local area. Therefore, it is not economically feasible to transport the honey from here to Mzuzu where it can be processed and packaged. If there were more beekeepers in the area it would be feasible to transport the honey to Mzuzu, opening the beekeepers up to a much larger market. At the moment, the local honey is mainly sold through the RIPPLE Africa office. Jess and Matt purchased a 1.5L bottle of honey for the volunteers to use. Delicious!

While Jess and Matt were on their honey adventure, Grace and Ashley decided to walk to Kande Lodge. While they greatly enjoyed the day (which included a bacon wrap) the walk proved a little bit too much for Grace’s feet, which were later covered in blisters.

The first after school sports session at Kapanda was a hit with the kids. Form One vs Form Three, with the girls playing netball and the boys playing soccer. The netball skills of the girls were very impressive – any shyness in the classroom dissipates once they step onto the netball court. Surprisingly the Form One girls had a convincing win over the Form Three girls. The soccer match was far closer. While the Form Threes had a much greater passion rate, the Form One goalie was fantastic and did not let one goal in! At full time neither side had scored. In the penalty shootout the Form One goalie once again impressed us, making two saves, resulting in the Form Ones winning the game.

Jess also found time to visit Chiomba Primary School and help to sow some seeds. The primary school has made a small nursery and RIPPLE Africa provided them with 1000 Senna Siamea seeds. With the help of the head teacher, the students learned how to prepare soil, fill tubes with soil and sow the seeds in the tubes. We can’t wait until these trees are big enough to plant in the grounds of the primary school. They will provide shade, animal fodder, fire wood, and most importantly, being nitrogen fixing trees, will help improve the soil.

Grace and Charlie have been busy with the Changu Changu Moto project. The environmental workers employed by RIPPLE to implement the Changu Changu Motos have successfully been conducting surveys on every household in the region. Grace and Charlie have been tirelessly entering all the data into the computer system. Not the most exciting work, but very important.

Ashley and Jess ran their first reading group this week at Mwaya Primary School. This group is held after school and attendance is voluntary. Since secondary school in Malawi is taught entirely in English, it is important that primary school students improve their English skills. One of the best ways to do this is through reading. Jess and Ashley helped the students read a book about the animals found in the Savannah. It was a fantastic start but Jess and Ashley both feel they need to do a lot to prepare for their next lesson. It will be difficult to find books that are at the right reading level (very low) but are still interesting for the age group (some of the kids are 13 or 14 years old).

Joan continued to make extra time to help Elliam out with his preparations for university. After setting up an email account, Elliam received his first email this week, making him ‘thrilled and delighted’.

This weekend all the volunteers decided to travel together to Mzuzu to extend their visas. After a long day of waiting in the immigration office, we finally received our visas. Not wishing to travel all the way back to Mwaya, we stayed in Nkhata Bay for the weekend. And what a good weekend to choose! We got to enjoy the monthly live music on Friday night and the full moon party on Saturday night, making lots of new friends in the process.

After arriving back at Mwaya, we were welcomed with another Sunday roast (chicken) and beautiful moon rise. For dessert, Ashley’s request for fruit salad instead of our regular fruit crumble did not come out as planned. The cooks decided to put the salad in the oven. However the result was delicious and we all enjoyed our warm fruit salad and custard. Even the dairy free custard (made especially for Jess) was fantastic.”