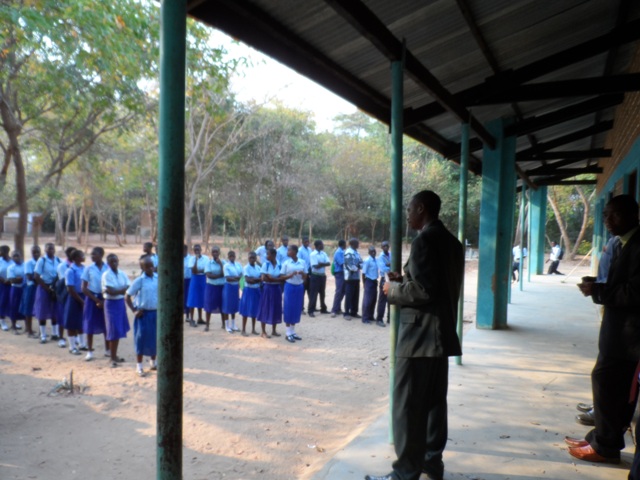 “It’s been another good week at Mwaya. We welcomed Ashley who is full of energy and enthusiasm. She is a primary teacher fresh from London, and very keen to share her expertise in the primaries. She is likely to work mostly at Kachere Primary, but has also arranged to run a reading club on Wednesdays. Ashley and Grace have been doing visits to primaries and pre-schools, and meeting with Maurice, RIPPLE’s education coordinator, to make plans for the best use of their talents. Grace has been busy up at Mazembe Primary, working on expressive arts, which is often used as a vehicle for social education – about AIDS and so on. She has also had lunch with Jane the Head Teacher there, who is expecting a baby in October. Grace has started an after-school art club at Mazembe, and an impressive 20 pupils (18 of them girls) turned up for that. It’s good that an opportunity for girls to get together is being provided.

Kapanda has been a busy place. It’s always good arriving for 7.30, seeing the grounds being swept (girls and boys on alternate days, in the name of gender equality!) We’re grateful for the wealth of trees around the school which keep the atmosphere cooler. A troop of monkeys seemed to enjoy them too this week, as they swept through the grounds chattering away, some little ones clinging to their mothers’ stomachs.

At Kapanda, the new maths teacher Augustin started on Monday, so there are fewer slots in the timetable to fit in with extra Science and English. Form 3 began this week, looking very smart in their blue Kapanda uniforms, so all the classrooms are full. Matt is still carrying the banner for Physics, and keeping the students intrigued and involved with interesting experiments; there seems to be no sign of a replacement teacher for Physical Sciences as yet. He’s working on electricity with Form 4, and at least one of the boys fancies a job in that area – this might be a growth industry in the future, as the Malawian government is considering opening up electricity supply to private companies. Apparently a small percentage of the population has access to electricity at present. As an English teacher doesn’t seem to be in the pipeline either, I’m happily continuing with Form 3 and 4 literature, and Form 2 Language. The Head Teacher has also agreed to split a class for Lifeskills, so that the girls in Form 2 can be encouraged to speak out more – they tend to be shy, in comparison with the boys.

Mr Phiri (one of the Kapanda staff) is studying for an external degree from Mzuzu University. This month’s assignment involved Wuthering Heights (hard to visualise bleak Yorkshire moors when you are here in sunny Malawi!), so a bit of assistance was available for that. Elliam, who is going to be training as a teacher-trainer at Mzuzu this coming academic year, has been helping out as well, in various subjects from Bible Knowledge to Maths. He is very supportive of staff, and willing to get involved. He has also been coming to computer sessions at Mwaya, in preparation for his studies. His wife is now a RIPPLE-employed trainee teacher at Mwaya Primary.

Making a start on formal record-keeping for the experimental garden, Jess has been impressed by the computer which is Andrew’s brain! Dates of planting and harvesting for the past two years are stored there with incredibly detailed recall. Jess, Matt and Dan had a very useful meeting with Andrew and the school staff, to link the garden more closely to the school curriculum. Lots of Kapanda pupils are turning up for extra lessons at Mwaya, (including biology with Jess) which is good to see. Boys are definitely in the majority at these 4pm sessions, whether for reasons of confidence, accessibility or fewer household chores, we don’t know.

Thursday was pay day, so Morton was very busy – large numbers of Ripple employees, from painters and handymen, to trainee teachers turned up at the office during the day. It’s good to see how much local employment has been created through RIPPLE.

Socially the onesies (giraffe and zebra) have been out in action, and Ashley is proving a mistress of gin rummy. Patrick has made Jessica a wicked chitenje skirt and top. Meals on the deck have been very convivial, with the weekend highlight being an astonishing roast chicken meal, complete with bread sauce. We had a fine carrot cake too – Ashley is also good at baking! The weekday treat was chilli con carne, with mince from Chinteche. Another delicacy has been peanut butter, made by Martha and Geddess, with help from Matt and Jess. Matt reckoned their help added on at least 20 minutes to the process! However he is in the running for a ‘care for the elderly’ award, having retrieved my forgotten spectacles on Tuesday, and sorted the gears on my bike on Thursday! Saturday’s highlight – the church choir singing on the deck. Happy days!”