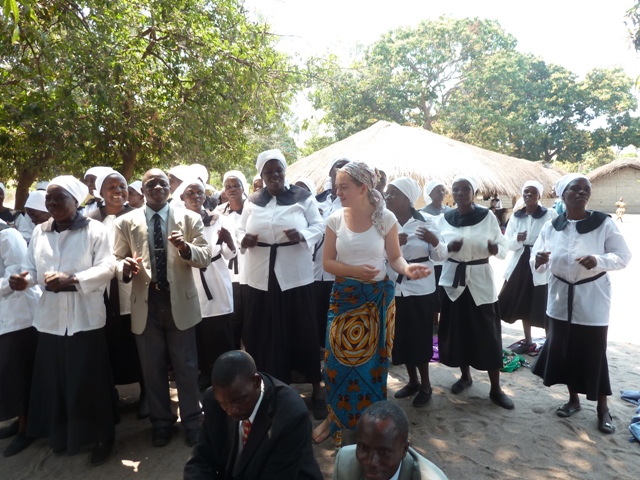 “I have been here at Mwaya beach exactly two weeks now (it’s Sunday afternoon: time to write the weekly blog) and I must say it’s been an extraordinary experience so far.

Today I went to the African church with one of the night watchmen, Anold. We left in the morning and after a two hour bike ride, that included a lot of sandy roads and waving back at the children shouting “mzungu” at you, we finally got to the church: a couple of chairs and a table in the shade of some mango trees.

The dancing and singing was amazingly full of life and passion and this made up for the fact that we probably spent altogether around 5 hours at church – another thing I’ve never done before! I was even asked to do some preaching but luckily I got away with just reading a short verse from the Bible. I happily joined in with the dancing and singing though and this seemed to make everyone very excited. The friendliness and warmth of these people was proven again when they insisted that I have a bottle of Fanta in the middle of the service to keep me going.

We were going to go to Anold’s house after church for lunch but when he told me that his wife is very ill I thought it would be better if I didn’t disturb her. When I got back to Mwaya at around 3.30pm I was famished and the left over cabbage and chapattis and tomato salad were a real treat!

Apropo tomato salad: we’ve got around 600 tomatoes now due to a little sneaky devil called Demas… Charlie had just left a little while ago to do some measurements when Demas came up to me with a big basket of tomatoes. He told me that he just met Charlie on the road who told him to get all of the tomatoes. I was pretty surprised since we already had quite a lot of tomatoes so I asked him whether he was sure that Charlie said that. Of course when Charlie got back the trick was found out so now we’re were having the simple but delicious tomato and onion salad with every meal.

Yesterday I accompanied Charlie and Andy to re-do some of the moisture content measurements for the Changu Changu Moto project in a small village near Nhkata Bay. We gave a lift to some soldiers who were looking after Joyce Banda, Malawi’s first women president. She was around visiting Mzuzu University and by chance Charlie and Andy saw her on Friday.

To access the village we had to go up some extremely steep roads (I was doubting whether we would make it) but the garimoto seemed to cope very well with these extraordinary roads. The view from the village was beautiful, overlooking the lake that seemed just like the sea. In the afternoon Charlie and I did a big shopping session at Nkhata Bay (we remembered not to get any tomatoes though!) and had lunch at a little restaurant where Charlie took the opportunity to have some sausages.

Next week I shall be continuing my tutoring session and Charlie is going to get on with some data input. Rhiya left on Thursday to go and look at some other fuel efficient stoves in Kasungu after she met a woman from the Peace Corps. We’re looking forward to another exciting week.”