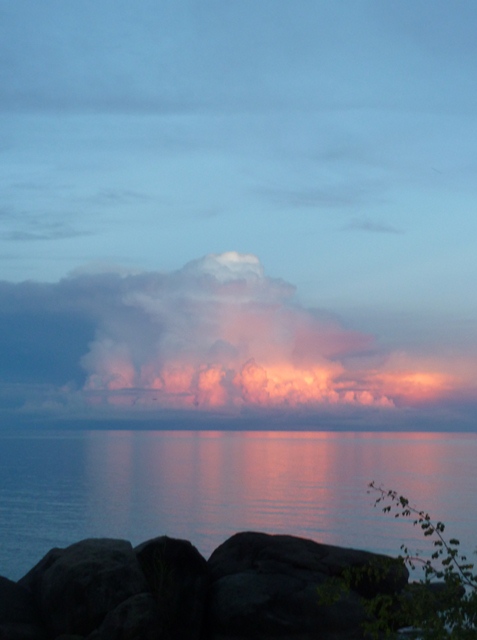 “After our eventful journey to Mwaya Beach this is our first blog for Mwaya Mondays. We, myself and my partner Charlie (endless confusion here with RIPPLE’s Charlie!) have spent the last week and a half settling in. Mwaya Beach is beautiful and we have experienced some spectacular lightning and thunderstorms, and some beautiful sunsets! The golden sands and rolling waves make Lake Malawi seem like the sea, and it’s still a surprise whenever I go in for a dip that it is freshwater.

Dan took us on our initial induction to see all the different areas that RIPPLE Africa is involved in around Mwaya. Our first stop was Mwaya Preschool, where we had the alphabet and numbers 1-20 recited very enthusiastically to us by the gorgeous children, then onto the Mwaya Primary school where we met Maurice and a couple of the other teachers. We also had an excellent and very thorough tour around the Mwaya Community Library. As I only brought my kindle out with me I will have to try and post some books out for this excellent library. Then it was onto Kapanda Secondary School, where the new houses for the teachers are almost finished. Then just enough time for a quick stop at Mwaya Dispensary, where the house for the medical assistant is also coming along well. In the afternoon Dan showed us the orchard, where there are oranges already growing (their first crop!), and tangerines. There are also mango tress and guavas, as well as fast growing and soil enriching acacias. Our visit to the nursery was very educational, where we learnt about ‘budding’ and ‘splicing’ of faster growing variants onto the hardier local trees. Also I never knew that Pineapples grow from bushes- I was very excited to see the pineapple plants!

We had to say goodbye to Lisbeth and Heinrich on Tuesday, which was sad as they are lovely people. Lisbeth was a volunteer last year and this year she and Heinrich have been staying for a short visit, and they were very kind to us, taking us under their wing during our extended bus journey. This year Heinrich had some considerable success in their short time here, installing three beehives at Kapanda Secondary School, two of which have already been inhabited by bees, which is excellent news! They were taking the overnight bus to Dar-es Salam from Mzuzu, before flying to home, so I hope their journey was not too arduous and they are both at home reading this in the blizzard that Denmark is having at the moment (its 28 degrees here and very sunny)!

As doctors and therefore healthcare volunteers, we met Collins who is in charge of healthcare last Friday; he is excellent at his job and has been very welcoming to us. Over the last week we have visited the other health centres with him, Kande and Kachere as well as Mwaya again, and met some of his rehab patients. One of the patients we met, when Lisbeth and Heinrich had seen him last year when he was 4 years old, could at that point not speak or even sit up by himself and had no facial expression. Collins has been working with him for the last year and he can now walk with just one hand for balance and he can speak to his Mum and smiles and plays and interacts with people now, which is an amazing improvement and all down to Collins and the RIPPLE Africa rehabilitation programme.

After almost two weeks here, Arnold is kindly trying to teach us Chitonga. Charlie likes to know exact meanings of words but it seems in Chitonga that some words can mean many things, for example- ‘yewo’- hello, thanks, okay, a positive acknowledgement! We now can say hello, how are you and respond, we’re working on our good mornings and good evenings and responses, we can say thank you, and we are learning how to say ‘what’s your problem?’- for clinics and learning body parts. However learning to say ‘I’m going to…’, or ‘I’ve just come from…’ are very similar and I think Arnold now thinks I’m very stupid! Hopefully by the end of the four months we will be almost fluent in Chitonga!

I’ll round off this week’s blog by mentioning a few of the animal encounters that we’ve had, as I have pictures of them. So there are some very sweet kittens in the office at the moment, which Charlie and I are trying to acclimatise to humans by giving them daily strokes, with the aim that hopefully we’ll have some friendly cats in the future! The vervet monkeys have been monkeying about especially early in the morning on top of our chalet roof, and yesterday evening I had to chase a crab out of my shower with a broom- it put up quite a fight!”