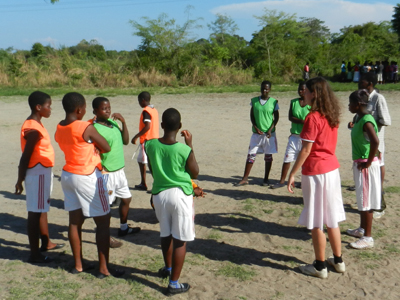 In a special profile of the great work RIPPLE Africa volunteer Jenni Hutchinson undertook during her time volunteering at the end of 2011, fellow volunteer Nikki Scott paints a picture of what it was like to witness the birth of the first women’s football team at Kapanda:

“Well, it looks like Mwaya may have it’s first ever women’s football team. During my recent volunteer experience with Ripple Africa I witnessed Jenni’s passion for football and the enthusiasm she showed for teaching. So when she combined the two and created a girl’s football team at Kapanda Secondary School, a match was made.

In addition to the hours Jenni did in the classroom and the numerous tutoring sessions she gave, I am sure a highlight of her time in Malawi was the opportunity to not only play loads of football but also to coach. (Although, looking at the way Jenni was limping around by the end of her stay, I am not sure that her Achilles tendon appreciated how much football she was playing.) Anyway, after tryouts and so many training sessions that even a professional team would have trouble managing to keep up with, it was time for the girl’s first game. As it turned out, Chifira Secondary School already had two female football teams and brought both their A and B team with them for the big day.

It was wonderful to see how excited the girls from both teams were and you could virtually see their confidence and self-esteem grow before you. Jenni was mortified when she saw that the other team was wearing Man U shirts (one of her least favourite teams…she is an Arsenal supporter) and used it to fuel her pre-match pep talk to the girls. 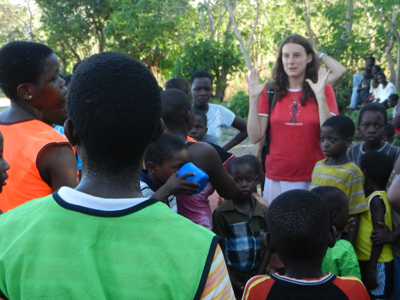 The match was held on a very hot (even for Malawi) Saturday afternoon and when the girls had got over the novelty of wearing shorts, with many a nervous giggle, they were ready to hit the field. The girls played with great spirit and determination. Even though the game went for 2 hours and the Chifira girl’s had enough subs to put a whole new team on the field in the 2nd half, the girl’s kept fighting, despite defeat. After the game, the girl’s were already talking about when the next game would be.

Now it looks like the time is right for a Mwaya woman’s team as well and although Jenni wasn’t there to see it, on all accounts, there was a great turn out for their first training session, with the likes of Ester and Catherine bending it like Beckham. Hopefully it is a legacy that will continue in her absence. 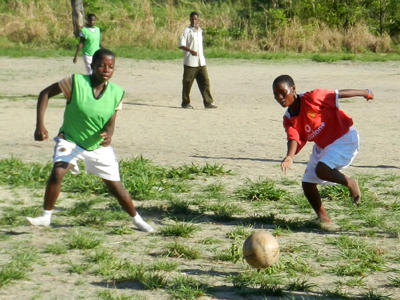 (Nikki and Jenni volunteered during the same time period, from September to December 2011.)