David Mphande has been fishing for 62 years 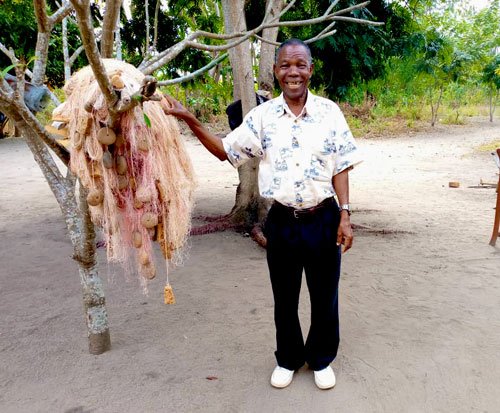 David Mphande is a fisherman and also the Fish Conservation Committee chairman at Msondozi beach. He started fishing in 1958 when he was 16 years old. He is still fishing today at 78.

Msondozi beach is to the north of Lweya River where fish species like Sanjika, Chambo and catfish breed. Mr Mphande said that when he was young he could catch 40 Sanjika in just a 50 metre long net but in the 20 years before the Fish for Tomorrow project was introduced, fish catches dropped significantly. Fishermen started using extremely long nets but were still only catching 10 fish during the whole night.

Mr Mphande is glad the Fish for Tomorrow project has been introduced so fishers can learn how to protect fish. He said, “Now most fishermen are following the fishing bylaws and this has meant the catch of fish has increased and fishermen rarely catch fish at the mouth of the river. On average fishers can catch up to 55 fish during one fishing trip, and sell each one for 500MK (55p/70c). Mr Mphande continued to say that the local economy has improved too.