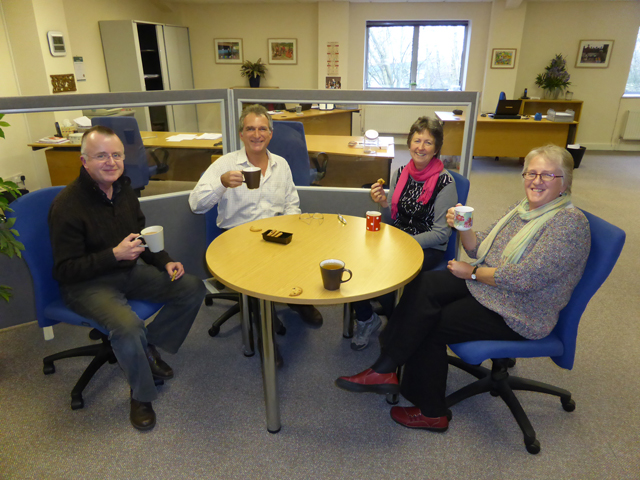 Back in April 2014, just after RIPPLE Africa opened its new UK headquarters, there was a blog entry informing us all about the new office. In that blog we were all invited to “drop in to see us for a cup of tea and maybe a game of ping pong”. Nearly a year later, I happened to be in the area so thought I would test that offer and meet everyone at the office.

My involvement with RIPPLE Africa has only been as a supporter and an avid reader of the weekly blog. The weekly stories from the volunteers at Mwaya on the work of the charity and the difference they make is inspirational. Therefore, an opportunity to meet with the people who make everything happen back in the UK was not to be passed up.

I was greeted by Liz, Geoff, Charlie and Pam. Unfortunately, Claire and Jo weren’t there that day so I wasn’t able to meet the whole team, but perhaps next time… I was made most welcome and not only had a cup of tea but the special biscuits were brought out too! It was great to experience first hand the enthusiasm the team have for the charity as a whole. I learnt about how Liz and Geoff first came across Mwaya (it appears it was as a result of a missed turning) and how the charity got its name. I hadn’t realised ‘RIPPLE’ was originally an acronym (I was told what it was but have already forgotten, I am afraid) but now I think is better thought of as descriptive of what happens in Mwaya. For example, Geoff was telling me about the success of the fish conservation project, so much so that the national Fisheries Department want to extend the project further along the lakeshore; hence the ‘Ripple’ effect.

My family and I were fortunate to be able to visit Malawi back in in 2009, when our daughter was teaching in Blantyre. Although we never made it north to Mwaya during our visit, we did experience the friendliness of Malawian people. It was an incredible trip and one that we will never forget. However, we also well remember the poverty and the lack of proper infrastructure and basic amenities. It is a salutary lesson to us in the UK who live in comparative luxury to experience extreme poverty. Therefore, supporting a charity that makes a difference is clearly worthwhile. I really hope I will be able to visit Mwaya one day to get an even better understanding of the tremendous projects and, of course, the Ripple effect. For instance, who cannot be intrigued by a Changu Changu Moto!

By the way, the team were true to their word, and I was persuaded to participate in a game of ping pong. I protested but there is no arguing it appears. I am ashamed so say I was on the side that lost 11-1.

My thanks to Liz, Geoff, Charlie and Pam for taking an hour out of their valuable time to indulge a passer by. We parted as friends – I look forward to the next time.

If anyone would like to follow Peter’s example and drop in for a chat, a cup of tea, and a game of table tennis, we’d be delighted to see you.